by Tibi Puiu
in Research, Science, Technology
A A

Scientist at MIT and Harvard University teamed up to figure out what would be the simplest 3-D structure capable of collapsing and morphing due to instability. Their inspiration came after the scientists came across a popular toy, spherical in shape and fitted with movable parts and hinges, which allows it to easily dimple in size reversibly. Based on this toy, the researchers created the  “buckliball,” a hollow, spherical object made of soft rubber with no movable parts, which can turn into a smaller ball, 46 percent its original size.

Its name was attributed since it resembles a buckyball, and because it makes us of the instability phenomenon known as buckling, most often in practice an effect which is sought to be avoided.

“In civil engineering, buckling is commonly associated with failure that must be avoided. For example, one typically wants to calculate the buckling criterion for columns and apply an additional safety factor, to ensure that a building stands, says  Pedro Reis, the Esther and Harold E. Edgerton Assistant Professor of Civil and Environmental Engineering and Mechanical Engineering at MIT. “We are trying to change this paradigm by turning failure into functionality in soft mechanical structures. For us, the buckliball is the first such object, but there will be many others.”

The buckliball has 24 special dimples arranged in a specific pattern for optimal buckling, which was induced by researchers by sucking the air of the buckliball with a syringe. When its thing ligaments buckle, the thicker ligaments rows undergo a series of movements the researchers refer to as a “cooperative buckling cascade.” Some of these thick ligaments rotate clockwise, while other counterclockwise, but interestingly they all come together harmoniously. Thus, the buckliball morphs from a circular structure into a rhombicuboctahedron at about half of its original size. 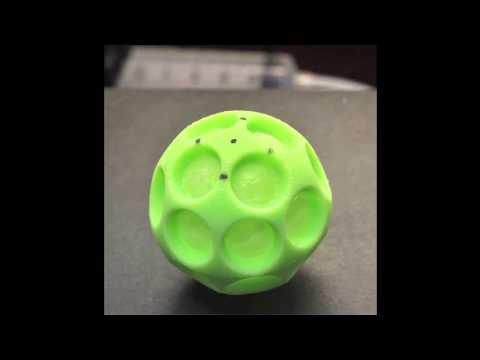 Morphable structures which make us of predictable buckling such as the buckyball have a range of application where they might be effectively used, be it on the micro or macro scale – a football stadium with an easily collapsible buckly dome; tiny drug-delivery capsules or soft movable joints requiring no mechanical pieces.

“The buckliball not only opens avenues for the design of foldable structures over a wide range of length scales, but may also be used as a building block for creating new materials with unusual properties, capable of dramatic contraction in all directions,” says Katia Bertoldi, an assistant professor in applied mechanics at Harvard.