by Tibi Puiu
in Health & Medicine, Research, Technology
Reading Time: 3 mins read
A A
Share on FacebookShare on TwitterSubmit to Reddit

At the advent of the transistor during the middle of the last century, computers simply boomed as a new era of technology was ushered in. Though it may not have the same humongous impact the traditional transistor had during its introduction, the all biological transistor recently unveiled by scientists at Stanford University will surely change the way technology and biology merge. Made out of genetics materials (DNA and RNA) the bio transistor will allow computers to function inside living cells, something we’ve been waiting for many years. 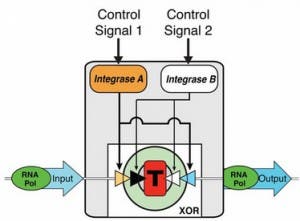 A transistor controls the flow of electricity through a device, acting like an on-off switch. Similarly, the biological transistor, called a “transcriptor“, controls the flow of an enzyme (RNA polymerase) as it travels along a strand of DNA. To achieve this, the researchers used a group of natural proteins, the workhorses of cells, to control how the enzyme zipped across the DNA strand.

“The choice of enzymes is important,” says Jerome Bonnet, who worked on the project. “We have been careful to select enzymes that function in bacteria, fungi, plants and animals, so that bio-computers can be engineered within a variety of organisms.”

Again, like in the case of the transistor whose main function is that of amplifying a signal like turning a weak radio signal into an audible one, the transcriptor can amplify a very small change in the production of an enzyme to produce large changes in the production of other proteins. After combining a couple of transcriptors, the Stanford researchers created logic gates that can host boolean operations. IF and ELSE statements are fundamental in basic computing (Boolean logic), and it is trough these logic gates that statements like AND, NAND, OR, XOR, NOR, and XNOR can be performed. The researchers chose enzymes that would be able to function in bacteria, fungi, plants and animals, so that biological computers might be made with a wide variety of organisms, Bonnet said.

But transistors aren’t enough to build a computer though, you also need memory to store information and someway to link (BUS) the memory (RAM) with the transistors. Previous research, however, has demonstrated that it is indeed possible to store data directly in DNA, so the necessary buildings block for building a working biological computer are here. Don’t expect it to come any time too soon though, let alone become widely available for public applications like those from monitoring their environment to turning processes on and off in the cells.

Nevertheless to speed up the process, Stanford has made its biological logic gate design public and anyone confident and skilled enough is more than invited to contribute.

The transcriptor has been described in a paper published in the journal Science.