Allan Savory's holistic management solution seems too good to be true. Hint: it's not.

by Tibi Puiu
in Biology, Research
Reading Time: 4 mins read
A A
Share on FacebookShare on TwitterSubmit to Reddit 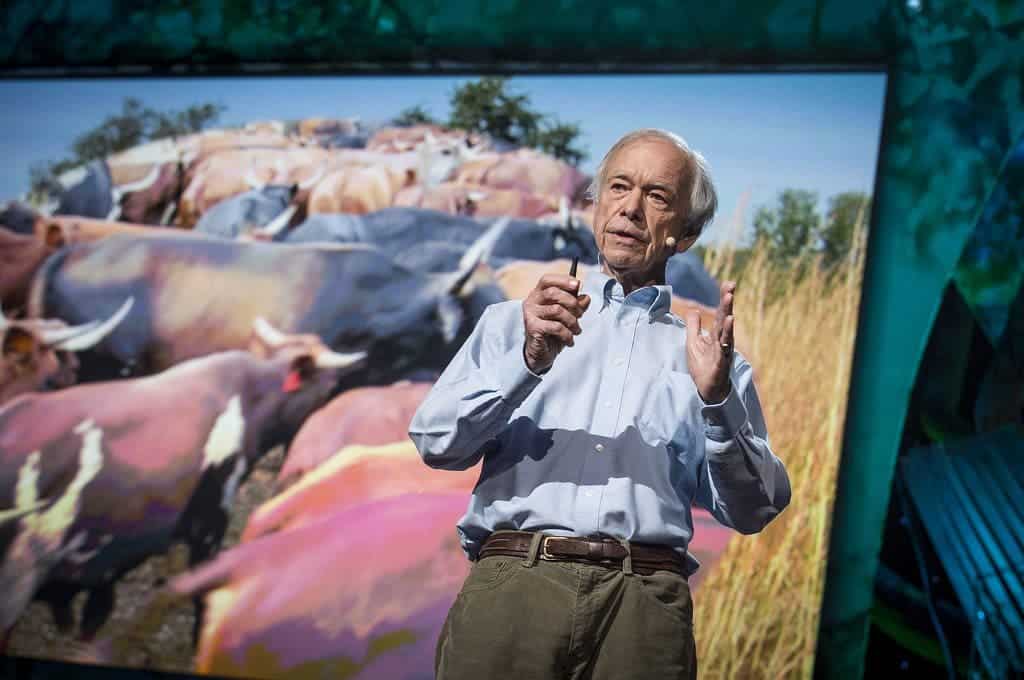 Allan Savory is a  Zimbabwean biologist who boasts a most unusual claim: “only livestock can save us”. He detailed his vision of what he calls holistic management in a TED talk that has already garnered over 2.6m views. In the talk, Savory claims and backs up with photos lacking citation that livestock grazing helps purify and improve the soil, keeps desertification away, while offering mankind a nifty supply of meat which will keep the world stuffed and happy.

When evangelism ignores the scientific method

His technique involves breeding a lot of livestock which he then lets graze the field intensively for short bursts, before moving on from small paddock to another. This intense bursts causes the soil to become excessively trampled, but in the process what Savory calls the “cancer of desertification’, namely a crust of algae, becomes destroyed. Trampling the vegetation and coating it with manure, the livestock thus helps the soil become richer and allows it to absorb more water. And if that wasn’t enough, the technique allows grasslands to flourish which then traps carbon from the atmosphere. Savory claims we can reach pre-industrial atmospheric CO2 levels just by letting livestock enrich half of the world’s grasslands.

“We can take enough carbon out of the atmosphere and safely store it in the grassland soils for thousands of years, and if we just do that on about half the world’s grasslands that I’ve shown you, we can take us back to pre-industrial levels while feeding people. I can think of almost nothing that offers more hope for our planet, for your children, for their children and all of humanity.”

Any red lights blinking so far? Well, let’s just start off that none of his claims have been backed up by any studies. The only data that seemingly backs up Savory’s claims are found at his website, and nowhere else.  On the contrary, there seems to be a wealth of evidence that not only disputes some of his claims, but suggest the opposite may happen if livestock is allowed to excessively graze!

A paper published in the  journal Agricultural Systems writes:

The vast majority of experimental evidence does not support claims of enhanced ecological benefits in IRG compared to other grazing strategies, including the capacity to increase storage of soil organic carbon … IRG has been rigorously evaluated, primarily in the US, by numerous investigators at multiple locations and in a wide range of precipitation zones over a period of several decades. Collectively, these experimental results clearly indicate that IRG does not increase plant or animal production, or improve plant community composition, or benefit soil surface hydrology compared to other grazing strategies

Another paper published in the Journal of Biodiversity found that grazing in arid places, Savory’s target, may actually destroy grassland and vegetation .

Published comparisons of grazed and ungrazed lands in the western US have found that rested sites have larger and more dense grasses, fewer weedy forbs and shrubs, higher biodiversity, higher productivity, less bare ground, and better water infiltration than nearby grazed sites.

Regarding the so-called “cancer of desertification”, it seems Savory has got it all wrong.

“These crusts are fragile, highly susceptible to trampling, and are slow to recover from trampling impacts. Loss of these crusts results in increased erosion and reduced soil fertility”.

Regarding his CO2 mitigation solution, Savory could use a bit of fact checking. According to realclimate.org, just to balance current carbon emissions, the uptake of carbon by all the world’s vegetation (not only grasslands) would have to triple – this includes rainforests, too. Is Mr. Savory unaware that livestock is responsible for 51% of greenhouse gas emissions, especially because of their respiration (releasing CO2) and their enteric fermentation (methane)? Is he any more aware about the kind of water shortage livestock cause? Mr. Savory, doesn’t seem to care about any of this. He’s a man on a mission!

When The Guardian’s George Monbiot confronted Savory in a telephone interview, the latter was evasive and kept changing the subject when asked for raw numbers or about any peer-reviewed studies that back his claims. One of his case studies involves a ranch in Arizona which he claims he helped save from desertification. In reality, it seems, the site has seen a massive increase in vegetation and plant diversity after the livestock was moved away. When asked about this by Monbiot, Savory, after yet again detracting from the subject, contested the quality of science being made in Arizona.

Personally, I’m not convinced by holistic management, least of all Mr. Savory.