by Tibi Puiu
in Other, Shorties 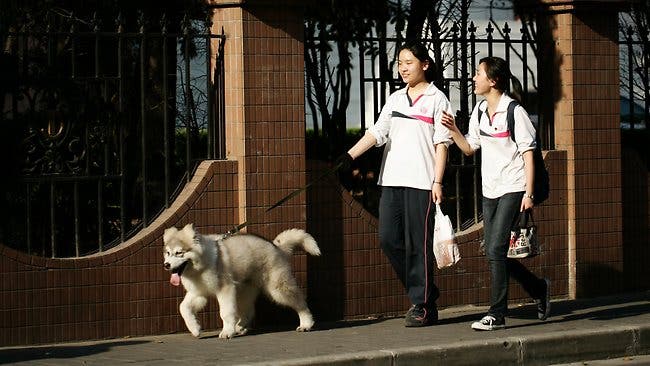 Reminiscent of the infamous one-child policy introduced in China in 1978, which limited urban Chinese families togiving birth to a maximum of one child, as a means of slowing down the alarming overpopulation trend, the country’s biggest city Shanghai has introduced a similar policy – this time for pets.

There are an estimated 800,000 dogs in Shanghai, a city numbering 23 million people, and only about 140,000 of the animals have been registered. The policy has been introduced as a measure of controlling the extremely numerous canine population in the city, as well as means of prevening rabies outbrakes.

Part of the policy, there is also a bill that stat that all dogs in the city must also receive rabies vaccinations. Dog owners who have not vaccinated their pets will face a fine of 1000 yuan ($150) if caught, also unregistered dogs will be declared illegal, which will give authorities the right to remove them from their owners.  The new law also places fines of 500 to 2,000 yuan on owners who abuse or abandon their dogs.

Last year alone, more than 140,000 people living in Shanghai reported to the police that they have been bitten by an unlicensed dog. The new regulation, which was announced in February, but only came into effect yesterday, also bans dogs bigger than 1 metre from the centre of the city and some particular races which are considered dangerous completely from the city – the includes bulldogs and pit bulls.

According to Ding Wei, director of the policy department of the Shanghai People’s Congress, the law is made to protect the interests of dog owners and non-dog owners alike.

“We are not trying to reduce the number of dogs but we encourage the citizens to be responsible for their dogs, which will benefit society,” Ding told the Global Times.