Sugar, not fat the main culprit behind the obesity epidemic

by Mihai Andrei
in Health & Medicine, Nutrition
A A

I always find it funny when something says “zero fat”, but has tons of sugar in it. Sugar is addictive, it’s teeming in your cereal, it’s in your soda, it’s almost everywhere – and we need to get off of it; not to say we shouldn’t eat any sugar, but we really need to lower our consumption. Why? Because sugar is the real villain in the obesity epidemic, and not fat as people used to think. Oh, it also causes significant increases in diabetes cases.

Dr Robert Lustig, who was this month in London and Oxford for a series of talks about his research, likens sugar to hardcore drugs. Yep, that’s right – cocaine and heroine are deadly because they are addictive and toxic – and so is sugar, he says, it just takes a little longer.

“We need to wean ourselves off. We need to de-sweeten our lives. We need to make sugar a treat, not a diet staple,” he said. “The food industry has made it into a diet staple because they know when they do you buy more. This is their hook. If some unscrupulous cereal manufacturer went out and laced your breakfast cereal with morphine to get you to buy more, what would you think of that? They do it with sugar instead.”

Robert H. Lustig is a pediatric endocrinologist at the University of California, San Francisco (UCSF) and is mostly working on childhood obesity. You might know him from Youtube, where a speech of his called “Sugar: The Bitter Truth” went viral, with over 3 million views (which for a 90 minute video is really something). 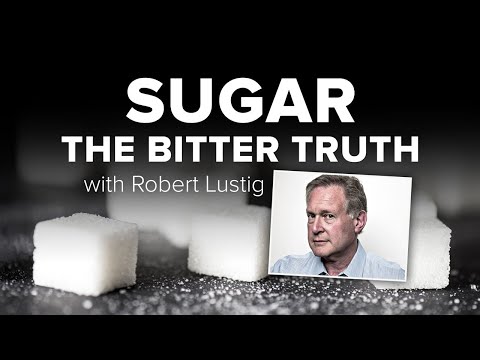 Now, he has released a book – Fat Chance: The Bitter Truth About Sugar, which concludes that the rivers of Coca-Cola and Pepsi consumed by young people today have as much (if not more) to do with obesity as the mountains of burgers. But even with all the negative effects of sugar, that doesn’t mean that burgers are OK or that their role should be neglected.

The problem, he explains is that cows in the US are fed corn, unlike say Argentinian cows, which are fed grass.

“In grass-fed beef, like in Argentina, there are no problems,” he said. “And that’s why the Argentinians are doing fine. The Argentinians have a meat-based diet … I love their meat. It is red, it’s not marbled, it’s a little tougher to cut but it’s very tasty. And it’s grass-fed. That’s what cows are supposed to eat – grass.”

He goes even deeper analyzing that problem; he explains that cows are basically suffering just like we do, but we eat them before they can get sick. He blames insulin for 75% to 80% of all obesity. Insulin is the hormone, he says, which causes energy to be stored in fat cells – the most notable source (but not the only one) being sugar. Just like humans get obese if they eat too much corn, so do cows.

“We [in the US] feed them corn and the reason is twofold – one, we don’t have enough land and, two, when you feed them corn they fatten up. It usually takes 18 months to get a cow from birth to slaughter. Today it takes six weeks and you get all that marbling in the meat. That’s muscle insulin resistance. That animal has the same disease we do, it’s just that we slaughter them before they get sick.”

When the whole “fat is making us obese” trend broke out, all the food companies were trying to make their products as fat free as possible – and it made sense, fat makes you fat, right? But they also started adding more and more sugar into products where it wasn’t really needed, and this actually has a much more negative effect. Why? Because a calorie is not a calorie – meaning that the effect of a calorie in sugar is different from the effect of a calorie in lean grass-fed beef. Also, added sugars come with a myriad of names (from glucose to diastatic malt), often disguised in food labeling and dextrose. Fructose is the biggest problem, and high-fructose corn syrup, used extensively by food manufacturers in the US, is the main source of it.

Lustig also explained the extensive campaign food companies are involved in, to discredit the negative effects of sugar – but you can’t trick science.

The problem, much like with all health issues, is money.

I was quite thrilled when Michelle Obama launched her Let’s Move initiative in February 2010 with a speech to the Grocery Manufacturers Association of America.

“She took it straight to them and said, ‘You’re the problem. You’re the solution.’ She hasn’t said it since. Now it’s all about exercise. Far be it from me to bad-mouth somebody who wants to do the right thing. But I’m telling you right now she’s been muzzled. No question of it.”

Again, this is not saying that people should eliminate sugar from their diets – just lower the consumption. The American Heart Association in 2009 published a statement, of which Lustig was a co-author, showing that the average American consumes no less than 22 teaspoons of sugar per day – and that number needs to go down.

“That’s a reduction by two thirds to three quarters. Is that zero? No. But that’s a big reduction. That gets us below our toxic threshold. Our livers have a capacity to metabolize some fructose, they just can’t metabolize the glut that we’ve been exposed to by the food industry. And so the goal is to get sugar out of foods that don’t need it, like salad dressing, like bread, like barbecue sauce.” There is a simple way to do it. “Eat real food.”