Ride the Moscow subway for free – just do 30 squats

As part of a great campaign to make the people from Moscow healthier, riders who buy the ticket at Vystavochnaya station in western Moscow now have the option to pay in squats. 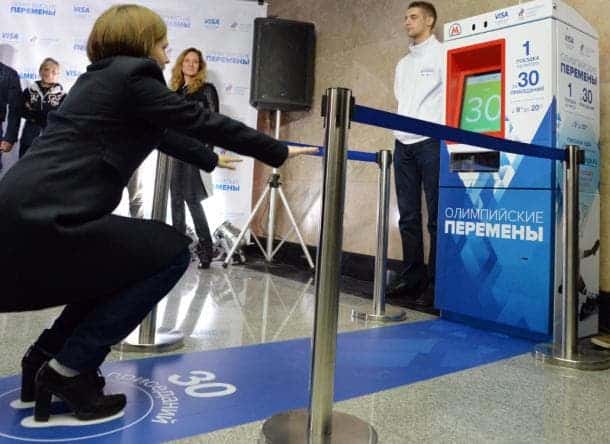 Get ready to drop down and give me 30 – if you want to ride the subway for free, that is. In an effort to promote both physical fitness and the upcoming Winter Olympic Games in Sochi, Moscow city officials and the Russian Olympic Committee are allowing subway riders to pay in 30 squats instead of 30 rubles (about 92 cents) for a single-ride ticket.

But there is a catch – you have t o do it in 2 minutes. You’ve got only 120 seconds to do the 30 squats (which is really just 1 every 4 seconds, not that hard), and you have to do it in front of a special machine that can tell if they’re assuming the correct position. The squat-operated ticket machine is located right next to the classic electronic vending machine in the station.

“We wanted to show that the Olympic Games is not just an international competition that people watch on TV, but that it is also about getting everyone involved in a sporting lifestyle,” Alexander Zhukov, president of the Russian Olympic Committee, told Russian state news wire RIA-Novosti, according to the Wall Street Journal.

Personally, I find this to be a great initiative – I’d love to see more such ideas applied, and not only in Moscow. I mean, it’s like we’re encouraging people to be obese and not exercise. I mean, many cities nowadays have escalators and moving stairs even in parks! Not to mention all the unhealthy fast food that’s advertised all the time on so many channels. Hopefully, people from the so-called Western World will learn a thing or two from this type of campaign, and apply it.

Obesity in the United States has been increasingly cited as a major health issue in recent decades. At the moment, 74 percent of all people in the US are overweight. That’s 3 out of every 4 people! Oh, and it doesn’t get much better in other countries – Australia and New Zealand are at about 67 percent, the UK is at 63, and even Canada has over 60 percent overweight people. This is one of the major epidemics the world is facing right now, and this type of campaigns can go a long way.

So what do the people in Moscow think about this? Apparently, they found it quite a challenge.

“It was hard at first but I managed it,” Lyudmila, a young woman who tested the machine, told AFP. “Two minutes is enough time.”

The option for squat payment will be available throughout November, and perhaps even beyond that.