by Mihai Andrei
in Nutrition
A A

In 2012, in the US, the fast food industry spent $4.6 billion to advertise (mostly unhealthy products) – with children and teens being the main target audiences. 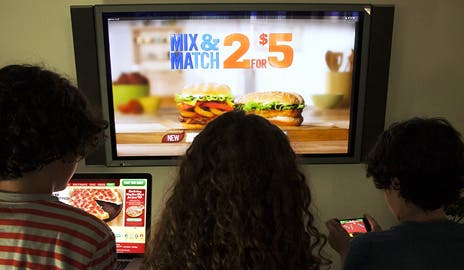 A new report released by the Yale Rudd Center for Food Policy & Obesity highlights some minor improvements such as healthier sides and beverages in most restaurants’ kids’ meals, but the fact that billions of dollars are spent each year to encourage kids to consume very unhealthy products is extremely worrying.

“There were some improvements, but they have been small, and the pace too slow,” said Marlene Schwartz, Rudd Center director. “Without more significant changes, we are unlikely to see meaningful reductions in unhealthy fast food consumption by young people.”

The report, Fast Food FACTS 2013, is a follow up of another 2010 report. Detailed findings of the report will be presented Nov. 5 at the American Public Health Association’s annual meeting in Boston, but researchers have already released some of the key findings:

As it turns out, most fast food producers and restaurants are forcing more and more advertisements of unhealthy products to kids because they are easiest to influence and manipulate.

“Most fast food restaurants stepped up advertising to children and teens,” said Jennifer Harris, the Rudd Center’s director of marketing initiatives and lead author of the report. “Most advertising promotes unhealthy regular menu items and often takes unfair advantage of young people’s vulnerability to marketing, making it even tougher for parents to raise healthy children.”

The full report (as well as other information and tools for consumers) can be found here.