by Tibi Puiu
in Mind & Brain, Psychology
Reading Time: 3 mins read
A A
Share on FacebookShare on TwitterSubmit to Reddit 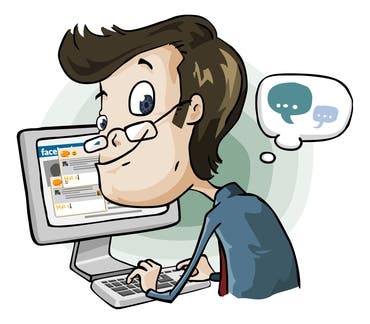 There are some 30 million facebook updates pushed on the massive social network every hour, so it might seem like common  sense for most of us to dismiss these as trivial. Scientists at University of Warwick and UC San Diego however chose not to ignore these fleeting, yet direct text updates and actually found some interesting conclusions as part of a memory test. It seems people remember facebook updates  a lot easier than actual faces or fragments from books. The implications of the study might resound in advertising, communications and education.

The researchers devised a series of memory tests in which participants were presented with anonymous facebook updates, stripped of images and context, and either pictures of faces or sentences picked at random from books. What they found was rather surprising, participants’ memory for Facebook posts was about one and a half times their memory for sentences from books, and nearly two and half more effective than for faces.

Lead author Dr Laura Mickes of the Department of Psychology at the University of Warwick said: “We were really surprised when we saw just how much stronger memory for Facebook posts was compared to other types of stimuli.

“These kinds of gaps in performance are on a scale similar to the differences between amnesiacs and people with healthy memory.”

Now, do not be alarmed. Facebook doesn’t have anything to do with these discrepancies, it’s just how we humans are hot-wired, namely we’re inherently built to favor what scientists call ‘mind-ready’ communication formats – spontaneous, unedited and closer to natural speech.  Facebook updates with their standalone bits of information – just like twitter or comments on online websites – are thus easier to memorize than a passage from a book, for instance.

Professor Christine Harris suggests: “Our findings might not seem so surprising when one considers how important both memory and the social world have been for survival over humans’ ancestral history.

“We learn about rewards and threats from others. So it makes sense that our minds would be tuned to be particularly attentive to the activities and thoughts of people and to remember the information conveyed by them.”

The truth is the 5,000 years or so of written language doesn’t pass as well as spontaneous and brief verbal communication. With the advent of modern communication tools like instant messaging, facebook or twitter, one might say that we’ve returned to our pre-literate roots in terms of effectively conveying information, be it internet gossip or not. Should authors write books in tweets then? I’d be terribly dishearten if someone would fall for this.

What the study findings suggest is that for conveying information that can be easily memorized, one more easier approach would be to communicate in a clear, concise, personal language.

“Knowing this could help in the design of better educational tools as well as offering useful insights for communications or advertising.

“Of course we’re not suggesting textbooks written entirely in tweets, nor should editors be rendered useless, – but textbook writers or lecturers using PowerPoint could certainly benefit from using more natural speech to get information across.

“And outside these settings, at the very least maybe we should take more care about what we post on Facebook as it seems those posts might just be remembered for a long time.”

Findings were reported in the  journal Memory & Cognition.