While there’s a lot of talk and debate around medicinal marijuana, dispensed for its curative properties against cancer and other ailments, not much is discussed on how marijuana addiction can be treated. Marijuana abuse has always been used by governments as a wild card for keeping it illegal, although the actual extent of it has never been fully assessed mostly because marijuana research is not being backed-up properly. What’s certain is that marijuana addiction is real, both psychological and physical, granted it’s been dramatized beyond its true extent (remember reefer madness). Psychiatrist at University of Maryland, in College Park believe they may have developed an effective treatment against marijuana abuse, after they tested their compound on addicted rats and monkeys with promising results. 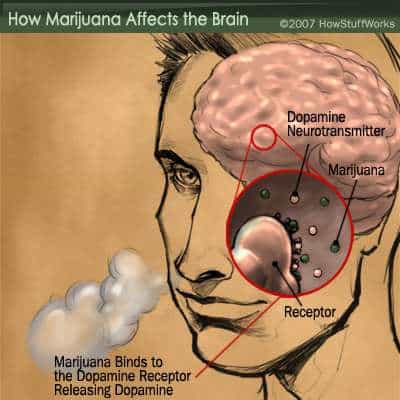 Kynurenic acid is a naturally occurring chemical compound in the brain, which works by blocking dopamine receptors in key areas of the brain related to marijuana consumption. THC, the active psychoactive ingredient in marijuana, when presented in the brain stimulates the release of dopamine – the feel good neurotransmitor that’s often associated with the high sensation. Dopamine is a reward signal which can be triggered by anything from eating junk food, to joyful experiences, to sex, to drugs.

“Any drug of abuse has to do with dopamine,” said study researcher Robert Schwarcz, a professor of psychiatry at the University of Maryland, in College Park. “We found out few years ago that kynurenic acid controls dopamine. All we had to do was put those things together,” Schwarcz said.”

Dopamine receptors are activated by THC in a specific area of the brain called the ventral tegmental area (VTA), stimulating the release of the brain chemical and consequent feel good rush. Other marijuana abuse treatments concentrated on blocking or inhibiting dopamine receptors in the VTA area, however the drugs caused certain unwanted side effects.

Kynurenic acid —  which is produced by the breakdown of a chemical found in bananas and turkey, called tryptophan — naturally inhibits dopamine receptors and as such the researchers believe a drug based on this compound will have fewer side effects. For their trials, the researchers turned rats and monkeys addicted to THC.  The animals were then placed in a chamber where they would self-administer THC. No, there weren’t any joints or bowls lighten by the animals. Instead, the rats and squirrel monkeys had a level from where they could procure their synthetic THC at will.

After the animals had their kynurenic acid levels boosted, scientists found that these would push the THC lever less often. In another experiment, the researchers took the animals off of the THC or synthetic drug for a while, and then increased their kynurenic acid levels while giving them a small dose of THC, or a cue associated with taking the drug. They found this prevented the animals from going back to their passed habits. If also applicable in humans, this means that kynurenic acid might help a lot of people from relapsing – a huge problem whenever substance abuse is concerned. What’s interesting is that kynurenic acid may be used to target other parts of the brain that work with other drugs, so in theory at least you could develop treatments for other substances as well: alcohol, cocaine, meth and so on.

Still, the researchers have to go through human clinical trial first. Hopefully, their results may be replicated in human subjects as well.

Findings were reported in the journal Nature Neuroscience.