Using an enzyme to ‘cut out’ the virus, German researchers have managed to find remove HIV from cells, leaving the cells virtually unharmed. This has a boatload of work before it sees the light of day, but it’s the most promising HIV study I’ve read in quite a while. 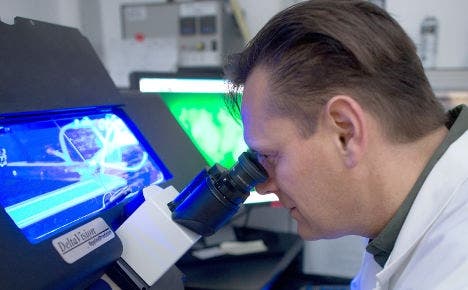 The media has a way of exaggerating when it comes to disease-focused research. Any advance, any achievement that was only successful in a lab is labeled as the ‘cure for cancer’ (or HIV, or whatever). This is not a cure for HIV, at the moment; matter of fact – it may never see the light of day. But it has many good things going for it, and it just might work.

Biomedicine researchers at Dresden’s Technical University succeeded in curing several HIV-infected mice with the new method by using a specific enzyme to cut the virus off.

This approach is the only one that destroys HIV while leaving the previously infected cells virtually unharmed. They did this not only in the controlled environment of a Petri dish, where everything is standardized, but in living mice, where the reality is much more complex and unpredictable. But moving from mice to humans is an equally challenging step.

Dresden team leader Professor Frank Buchholz said the ‘molecular scissors’ which cut the virus could be used in ten years in humans, but unfortunately, his team doesn’t have the funding to continue the studies.

“Blood would be taken from patients and the stem cells which can form blood cells, removed,” he said.

What they do is extract white blood cells, give them a new gene, then reinsert them into the body. The body then naturally proliferates the cells, and the gene, throughout the whole body.

The theory was that the genetically altered immune cells would reproduce, cut the HIV from infected cells and leave them unharmed – and exactly this was observed in mice.

“The amount of virus was clearly reduced, and even no longer to be found in the blood,” said Hauber.

The researchers have managed to manipulate the enzyme so that it can identify a particular sequence and remove it, and they claim this can be applied successfully to over 90 percent of all HIV cases. Hopefully, they will receive the necessary funding, otherwise this is all in vain.