For the first time, scientists have observed in a patient the evolution of an immune molecule that recognizes different HIV types and adapt accordingly. 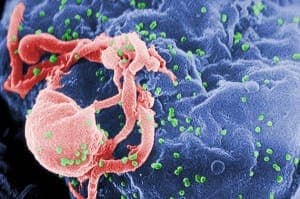 A neutralizing antibody, or NAb is an antibody which defends a cell from an antigen or infectious body by inhibiting or neutralizing any effect it has biologically. They’re your body’s elite force, who get sent in whenever something bad happens. By revealing how these molecules develop when adapting to different HIV strains, researchers can make vaccines that elicit similar antibodies that can protect people from becoming infected with HIV.

Barton Haynes of Duke University School of Medicine in Durham, North Carolina and his team found that neutralizing antibodies developed only after the population of viruses in the patient had diversified – something which has been suspected for quite a while, but not observed.

“This is a really beautiful demonstration,” says William Schief, a protein engineer specializing in vaccine design at the Scripps Research Institute in La Jolla, California. “It poses the question for the vaccine-design field of how much of that viral diversity we need to incorporate into our vaccine regimens to try to elicit broadly neutralizing antibodies.”

A big problem in dealing with HIV is that different strains adapt and change so often that it’s very hard for researchers to keep up with them, so they often focus on broadly effective vaccines, which aren’t quite as effective in some cases.

But getting human cells to make broadly neutralizing antibodies – that’s a much better approach, and one which is much more difficult, as scientists observed. The antibody that Haynes and his colleagues describe today, dubbed CH103, recognizes fewer HIV viruses than some other broadly neutralizing antibodies, but it is also much less complicated than the vaccines, which makes it much more possible to recreate.

“A message of our paper is that broad neutralizing antibodies don’t have to be as complicated as we thought, and therefore may be more easily induced,” says Haynes.

The team will now focus on mutating the antibody in order to strengthen its effects.

“The big question now is, once one has activated that germline B cell, how does one get that B cell to undergo maturation to produce a broadly neutralizing antibody?” Schief says.