by Tibi Puiu
in Animals, Genetics, Mind & Brain, Studies
Reading Time: 3 mins read
A A
Share on FacebookShare on TwitterSubmit to Reddit 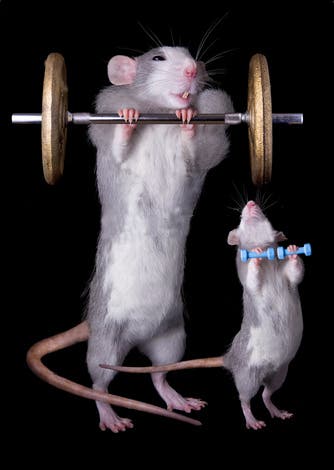 Scientists from the École Polytenchnique Fédérale de Lausanne (EPFL), with the aid of colleagues  from the Salk Institute for Biological Studies and the University of Lausanne, managed to improve the muscle constitution of mice by knocking out genetically a “co-repressor” of the DNA transcription process. The end product are mice that are faster, stronger and healthier – meet the new generation of super mice!

The researchers reduced the expression of a nuclear receptor corepressor (NCoR1) in the muscles tissue, which lead to increased muscle mass, enhanced exercise performance and increased oxidative capacity. When NCoR1 is reduced, several transcription factors that regular muscle functions are activated.

“There are now ways to develop drugs for people who are unable to exercise due to obesity or other health complications, such as diabetes, immobility and frailty,” says Ronald M. Evans, a professor in Salk’s Gene Expression Laboratory, who led the Salk team. “We can now engineer specific gene networks in muscle to give the benefits of exercise to sedentary mice.”

The genetically engineered mice proved to be genuine marathonists, running a lot faster and longer than normal mice; in fact, the super mice proved that they could run twice as much. That’s not all either, they also exhibited better cold tolerance too. Also, although the corpulence of the mice being studied was fundamentally changed,  no weight-related diseases have been induced. “The specimens that became obese via this treatment did not suffer from diabetes, unlike mice who become obese for other reasons,” notes  EPFL professor Johan Auwerx, who lead the research.  So far no side effects have been observed.

Check out the video below which perfectly illustrates the researchers’ work and results. World Radio Switzerland also has an audio interview with professor Auwerx on their website.

Unlike previous experiments that focused on “genetic accelerators” this work shows that suppressing an inhibitor is a new way to build muscle. Examination under a microscope confirmed that the muscle fibers of the modified mice are denser, the muscles are more massive, and the cells in the tissue contain higher numbers of mitochondria —- cellular organelles that deliver energy to the muscles.

The results rendered by mice were replicated with the same remarkable results in nematodes C. elegans, hinting that it might be an evolutionary conserved mechanism.

Scientists believe the research, which was recently published in the journal Cell, are a great leap forward towards better understanding the complicated mechanisms of living organisms, in particular the little-studied roles of corepressors.

“This could be used to combat muscle weakness in the elderly, which leads to falls and contributes to hospitalizations,” emphasizes Auwerx. “In addition, we think that this could be used as a basis for developing a treatment for genetic muscular dystrophy.”

What about those universal soldiers projects? Super mice, super soldiers, super toasters. Still, I find all of this genuinely super.