Lifeless prions are capable of evolution

by Mihai Andrei
in Biology, Genetics, Health & Medicine, Research
Reading Time: 2 mins read
A A
Share on FacebookShare on TwitterSubmit to Reddit 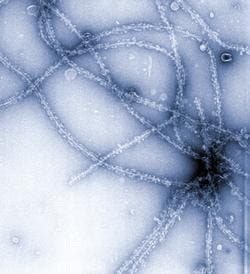 Researchers from the Scripps Research Institute have determined for the first time that prions, which are just bits of infectious protein without any DNA or RNA that can cause fatal degenerative diseases are capable of Darwinian evolution.

This study shows that prions do develop significant large numbers of mutations at a protein level as a response to external influences, and through natural selection, they can eventually lead to mutations such as drug resistance.

“On the face of it, you have exactly the same process of mutation and adaptive change in prions as you see in viruses,” said Charles Weissmann, M.D., Ph.D., the head of Scripps Florida’s Department of Infectology, who led the study. “This means that this pattern of Darwinian evolution appears to be universally active. In viruses, mutation is linked to changes in nucleic acid sequence that leads to resistance. Now, this adaptability has moved one level down — to prions and protein folding — and it’s clear that you do not need nucleic acid for the process of evolution.”

This also started another discussion, well actually restarted it, that of the quasi-species. First launched 30 years ago, this idea basically suggest a complex, self-perpetuating population of diverse and related entities that act as a whole.

“The proof of the quasi-species concept is a discovery we made over 30 years ago,” he said. “We found that an RNA virus population, which was thought to have only one sequence, was constantly creating mutations and eliminating the unfavorable ones. In these quasi-populations, much like we have now found in prions, you begin with a single particle, but it becomes very heterogeneous as it grows into a larger population.”

“It’s amusing that something we did 30 years has come back to us,” he said. “But we know that mutation and natural selection occur in living organisms and now we know that they also occur in a non-living organism. I suppose anything that can’t do that wouldn’t stand much of a chance of survival.”