Strangely enough, it was computer simulation that provided the mathematical support for the grandmother hypothesis – a famous yet controversial theory which suggests adult humans have longer lifespans as a result of grandmother babysitting. 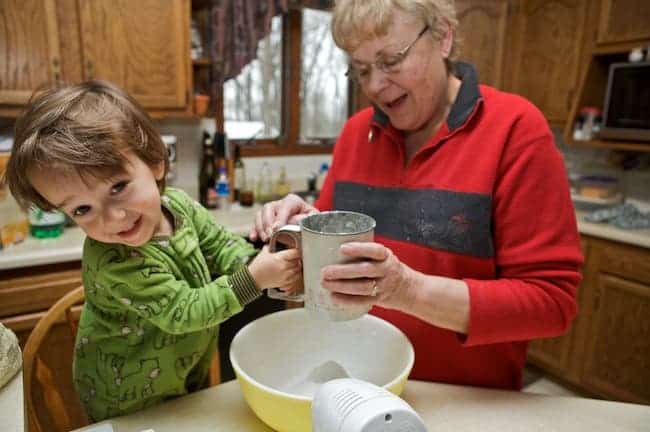 The simulation indicates that without any estimate of the brain size, an animal with a chimp-like lifespan can evolve in only 60.000 to live about the same as humans today (eliminating the impact of modern medicine). Female chimps for example live into their 30s, and sometimes into their 40s, but their lifespan decreases significantly after their child-bearing years. Humans on the other hand have no such problem, surviving well past the child bearing years.

“Grandmothering was the initial step toward making us who we are,” says Kristen Hawkes, a distinguished professor of anthropology at the University of Utah and senior author of the new study published Oct. 24 by the British journal Proceedings of the Royal Society B.

The findings were pretty clear; the simulated creatures lived about 25 years after they reached adulthood (much like chimps). However, after 24.000 – 60.000 years with good old grandma babysitting, they started reaching 49 years of life after adulthood, much like humans in hunter-gatherer societies. The theory says that when grandmothers help feed their grandchildren after weaning, their daughters can produce more children at shorter intervals. The children are weaned from a younger age but older when they can first feed themselves and reach adulthood. By allowing their daughters to have more children, the ancestral females practically passed on their longevity genes to more descendants, which lived longer lives and passed on the gene even more.

Hawkes conducted the new study with first author and mathematical biologist Peter Kim, a former University of Utah postdoctoral researcher now on the University of Sydney faculty, and James Coxworth, a University of Utah doctoral student in anthropology. The study was funded by the National Science Foundation and the Australian Research Council.

How grandmothering came to be

The hypothesis stemmed from original observations made back in 1980, by Hawkes and O’Connell, during the period they lived with Tanzania’s Hazda hunter-gatherer people and watched older women spend their days collecting tubers and other foods for their grandchildren. They realized that except for humans, all primates and mammals collect their own food after weaning.

But as the environment developed in Africa 2 million years ago and got significantly drier, more open grasslands emerged, leaving a smaller portion covered in forests where food could be found.

“So moms had two choices,” Hawkes says. “They could either follow the retreating forests, where foods were available that weaned infants could collect, or continue to feed the kids after the kids are weaned. That is a problem for mothers because it means you can’t have the next kid while you are occupied with this one.”

This offered a great opportunity for women whose childbearing years were drawing to an end – grandmothers, in an great example of how a true society works when everybody plays their part. The primates who chose to move after the forests are now “our great ape cousins”, says Hawkes.

The competing theory is the “hunting hypothesis” – which explains that as resources grew scarcer, people found that hunting was much more rewarding than foraging for food; as a result, early humans with better hunting skills, who developed new techniques and applied clever use of weapons were favored. Women formed “pair bonds” with men who were more clever and brought more meat, and many anthropologists believe that increasing brain size in our ape-like ancestors was the major factor in humans developing lifespans different from apes.

But this computer model totally ignored brain size, showing that even reduced grandma babysitting can go a long way towards longevity.

“If you are a chimpanzee, gorilla or orangutan baby, your mom is thinking about nothing but you,” she says. “But if you are a human baby, your mom has other kids she is worrying about, and that means now there is selection on you – which was not on any other apes – to much more actively engage her: ‘Mom! Pay attention to me!’Grandmothering gave us the kind of upbringing that made us more dependent on each other socially and prone to engage each other’s attention,” she adds.