Bacteria replicate close to the limit of thermodynamic efficiency

We often like to think us humans have achieved a remarkable standard of efficiency and development – but a look at the animal life around us is often enough to humble us. 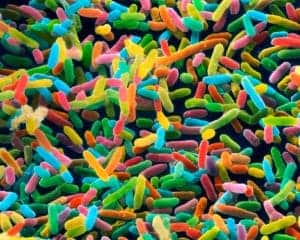 The common gut bacteria, Escherichia coli (E. coli, in short) typically takes about 20 minutes to duplicate itself in good conditions – a staggering rate, but could it do any faster? According to researchers it could, but only a little.

Jeremy England at the Massachusetts Institute of Technology in Cambridge estimates bacteria are impressively close to the limit imposed by replication thermodynamics – by only a factor of two or three.

“It is heartening to learn this”, says Gerald Joyce, a chemist at the Scripps Research Institute in La Jolla, California, who develops synthetic replicating molecules based on RNA. “I suppose I should take some comfort that our primitive RNA-based self-replicator apparently operates even closer to the thermodynamic lower bound”, he adds.

The study was motivated by a long lasting desire to blend thermodynamics with the living world, and an even more puzzling question, how do they seemingly defy the Second Law of thermodynamics, sustaining order instead of falling apart into entropic chaos?

Well the break of the law is only apparent: living organisms produce enough entropy through the form of heat to compensate for their own orderliness – which is why you’re hot when the outside temperature is the same as your own body (or even lower), because you need to release heat. England set out to thoroughly explain how much heat must unavoidably be produced by replication; in other words, how efficient can replication be, in respect to thermodynamics.

To tackle this issue, he used various complex concepts of statistical mechanics to figure out what is the cheapest way, in terms of energy, to go from one E. coli to two E. coli. In order to do this, the raw ingredients of the new cell have to be put in order, and that order has to be ‘paid’ with energy – pumping heat into the surrounding environment. In order to calculate the amount of energy, he first calculated how much energy has to be ‘paid’ in order to transform the raw ingredients (amino acids, for example) into cell parts. But this is just the first, easier part. Things get more complicated from now on.

He also had to figure out the impact of the chemical bonds tying the cell parts together as well as the number of bonds, as well as the other biological processes the bacteria undergoes. As an analogy, imagine building a car: it’s not enough to build the parts and put them in a room, you also have to assemble them in the right order and make sure the car will turn out fine.

This, in turn, can also be calculated by the reverse process: a second cell falling apart into its constituents. But this heats up the debate even more.

The problem is, as England himself describes it, that “there are many ways of starting with two cells and ending up with one”, and not all are equally likely. The challenge, he explains, is to figure out “what class of paths should dominate that process”.

Determinining those “many ways” is the real problem here.

“You can drive yourself nuts trying to think of everything,” England says.

But he took the easy way out, considering the most general reversal route: he assumed that by chance, all the molecules in the replicated bacteria just disintegrated – something which of course is extremely unlikely. But by figuring out precisely how unlikely, England can place a rough limit on how reversible replication is, and thus on its minimum energy cost.

It’s this approach that has been deemed as irresponsible by other researchers.

“As an experimentalist, it is hard for me relate to this ‘spherical cow’ treatment of a self-replicating system,” Joyce says. “Here E. coli seems to be nothing more than the equivalent of its dry weight in proteins.”

The ‘spherical cow’ is a joke making fun of some researchers’ tendency to oversimplify facts and relations. But even so, Joyce agrees with England that bacteria could hardly to better, especially considering that they have to deal with different environments and they have to cope with every one of them. The study could have numerous ramifications in biotechnology, in the attempt to create modified bacteria.