by Mihai Andrei
in Physics
Reading Time: 5 mins read
A A
Share on FacebookShare on TwitterSubmit to Reddit

Well, the year really kicked off in style. This research is really next level physics, and in order to understand it (even slightly), we’re going to delve into some serious physics. 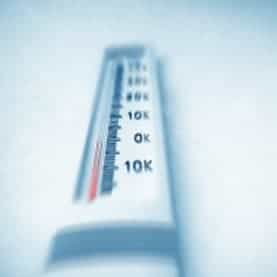 Over the years, physicists have made significant progress in cooling objects closer to absolute zero (0 Kelvin, the temperature at which all molecular motion stops because there is no energy in the classical sense. Absolute zero is the absolute zero, and you can’t reach it, so ultimately, you are limited. So how can you go below 0 Kelvin?

First of all, you have to understand that thermodynamics doesn’t define temperature as a physical parameter, but rather as a statistic of the energy distribution present so basically, you can create crazy temperatures with unusual distributions. Therefore, it is theoretically possible to have a negative value – just note that for this particular case, as weird as it would seem, negative doesn’t mean lower than zero. So how did they do it?

Well, you first want to bring the gas to almost zero temperature;  two concepts appear here: laser trapping and evaporative cooling. Basically, you have a flow of atoms running around in one direction. You point a laser exactly at them, in the opposite direction. Just like you would try running against a stream or a very powerful wind, the atoms are slowed down, stopped, or even pushed backwards. Then you put another laser in their original flow direction to even it out, and they are practically stuck. Do the same thing from up and down lasers, and you’ve trapped the atoms which are now stuck in your trap. That’s when evaporative cooling kicks in. Now remember, the temperature of the atoms is dependant strictly on their energy, so if we could somehow remove the high-state energy atoms, then we would be left only with the lower energy ones – the temperature would drop, and so would the temperature. To do this, researchers loosen the trap just a tiny bit – that way, the higher energy atoms can escape. Rinse and repeat, loosening it more and more, until you are stuck with only the low energy atoms and the low temperature. The thing is, even an extremely low amount of energy is some energy, so you can’t really do it until you reach 0 K(elvin). This is what researchers typically use when they want to drop temperatures close to 0, but in order to go negative, you have to use something different.

Again, many sites and magazines, even high quality ones are dancing around the issue here, so I’d like to underline it again: having negative temperatures on the Kelvin scale and going below absolute zero are not the same thing. In fact, they are fundamentally different.

Ulrich Schneider, a physicist at the Ludwig Maximilian University in Munich, Germany reached such sub-zero temperatures; after bringing them to extremely low temperatures, they used an ultracold quantum gas made up of potassium atoms, using lasers and magnetic fields to keep the individual atoms in a lattice arrangement. At positive temperatures, the atoms repel, making the configuration stable. The team then quickly adjusted the magnetic fields, causing the atoms to attract rather than repel each other – causing a major shift in the atoms.

“This suddenly shifts the atoms from their most stable, lowest-energy state to the highest possible energy state, before they can react,” says Schneider. “It’s like walking through a valley, then instantly finding yourself on the mountain peak.”

Wait, what? Here’s a relatively layman explanatiopn that I hope will clarify things. For a typical material with positive temperature, adding energy in the form of heat makes it more disordered, incerasing its entropy. Entropy can be loosely defined as a measure of the chaos in the system, so imagine this system. Say you have a system with equally equivalent atoms, all of which are in a low energy state (pretty much all systems have most atoms in low energy states). The system is perfectly ordered. Now, say you give the system just enough energy to lift one atom to a superior energy state; the entropy has increased – you have no way of telling which atom will rise, and the system suddenly becomes more chaotic, disordered. But say you somehow manage to create a system where all atoms but one are in a high energy state; when you add the same amount of energy, your system will become more ordered, as you know exactly which atom will rise, and you’ll again have a perfectly ordered system. That’s the thing here; if you give energy to a system it will become more and more disordered, up until a point where giving it energy will actually make it more ordered.

The team’s result marks the transition from just above absolute zero to a few billionths of a Kelvin below absolute zero.

The whole idea is counter intuitive and requiers a firm understanding of thermodynamic principles to grasp, so it’s a little quirky to talk about what’s peculiar here, but what is just down right strange is that sub zero gases mimic ‘dark energy‘ – the mysterious form of energy which pushes and expands our Universe faster and faster, against the Universe’s own gravity.

“It’s interesting that this weird feature pops up in the Universe and also in the lab,” Schneider says. “This may be something that cosmologists should look at more closely.”