by Mihai Andrei
in Biology, Genetics
Reading Time: 4 mins read
A A
Share on FacebookShare on TwitterSubmit to Reddit

However, for the first time, researchers have now created a living cell with an added pair of DNA “letters,” or bases, not found in nature – the DNA alphabet just got some new letters!

“Life on Earth in all its diversity is encoded by only two pairs of DNA bases, A-T and C-G, and what we’ve made is an organism that stably contains those two plus a third, unnatural pair of bases,” said TSRI Associate Professor Floyd E. Romesberg, who led the research team. “This shows that other solutions to storing information are possible and, of course, takes us closer to an expanded-DNA biology that will have many exciting applications—from new medicines to new kinds of nanotechnology.”

Indeed, this is a monumental breakthrough, which could have potential applications in developing drugs and other useful biomolecules, paving the way for engineering new cells with new purposes.

DNA in a test tube

Scientists have toyed with the idea of developing new DNA for decades, but it wasn’t until 1989 when Steven Benner, then at the Swiss Federal Institute of Technology in Zurich, developed the first non-natural pair of DNA bases in a test tube. But the DNA developed by Romesberg’s team is even more alien, but at the same time, resembles ACGT more. They identified a pair of bases, known as d5SICS and dNaM, that looked promising – the biggest challenge was to make them compatible with enzymatic machinery that copies and translates DNA.

“We didn’t even think back then that we could move into an organism with this base pair,” says Denis Malyshev, a former graduate student in Romesberg’s lab who is first author of the new paper. Working with test-tube reactions, the scientists succeeded in getting their unnatural base pair to copy itself and be transcribed into RNA, which required the bases to be recognized by enzymes that had evolved to use A, T, C and G.

Moving on to real organisms 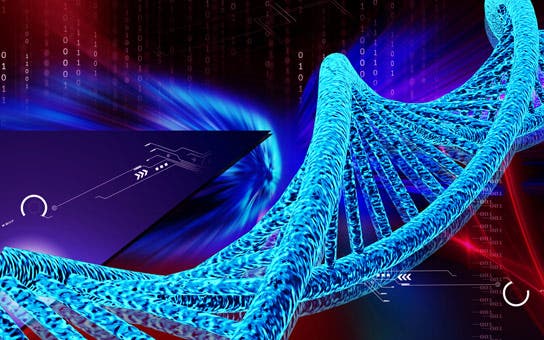 So what researchers did was to take E. coli and modify it. Before they got E. coli to actually start replicating the DNA itself, they first had to supply the molecular building blocks artificially, by adding them to the fluid solution outside the cell. Then, they had to find special triphosphate transporter molecules to transport the DNA into the E. coli – basically, they added the transporter molecules into algae, and they fed the bacteria the algae.

Even after they figured out the transport mechanism, it took a whole year of figuring out problems and surpassing hurdles, but after that, it worked – the DNA was replicating on its own!

“When we stopped the flow of the unnatural triphosphate building blocks into the cells, the replacement of d5SICS–dNaM with natural base pairs was very nicely correlated with the cell replication itself—there didn’t seem to be other factors excising the unnatural base pairs from the DNA,” Malyshev said. “An important thing to note is that these two breakthroughs also provide control over the system. Our new bases can only get into the cell if we turn on the ‘base transporter’ protein. Without this transporter or when new bases are not provided, the cell will revert back to A, T, G, C, and the d5SICS and dNaM will disappear from the genome.”

A big leap, a reason to worry?

Maybe sci-fi fans will feel a little anxious here – I mean, developing unnatural DNA in a bacterium and feeding it algae… that sounds like a recipe for disaster, right ? However, there is no reason to worry. First of all, we’re talking about the controlled environment of a lab – at the first sign of possible unwanted contamination, the project will be certainly stopped. Second of all, these new base pairs of DNA do not code for anything. That can transcribe to RNA, but not to the transfer RNA that actually links the base pairs with amino acids. They can not create new proteins, they could not implement new information. In theory combined with other biotechnologies, it could do that, but it’s premature and unwarranted to talk about that.

For now, this is simply a groundbreaking discovery!

“Many in the broader community thought that Floyd’s result would be impossible,” says Benner, because chemical reactions involving DNA, such as replication, need to be exquisitely sensitive to avoid mutation.