by Tibi Puiu
in Biology, Health & Medicine
A A

A few years ago ZME Science reported how a group of researchers at University of Maastricht in Holland were on a mission to grow the first lab cultured ‘hamburger’. After five years of painstaking work and €250,000 invested (backed by Google’s Sergey Brin), an edible version was finally developed and what better way to put it to test than…eat it! As such,  a food writer, a food researcher, and a scientist each tasted an artificial hamburger  at a press event in London.

First off, though: how do you grow a hamburger?  Maastricht University’s Professor Mark Post, the leading researchers behind the project, and colleagues used stem cells collected from leftovers picked up from slaughterhouses. The cells were then placed in a petri dish arranged inside a cylindrical gel scaffold where they fed on a nutrient mix, including fetal bovine serum and antibiotics. From here on, the hardest part is over (offering the right conditions), as the cells naturally contract and divide eventually growing into a strand of muscle tissue. Actually, the there’s not much of a limit to how much muscle can grow. According to Post, with the right scaffold and nutrients, you could grow 10 tons of meat if you’d like.

Why on Earth would someone go through the hurdles of growing meat in a lab? For one, the meat industry today is insanely despicable. Animals grown for meat (cattle, sheep, chickens) are mostly treated in grave, inhumane conditions and are fed with copious amounts of antibiotics to make them more resistant. Since the animals are stressed, pumped with chemicals and lack the necessary muscle exercise, the meat is a lot less tasty and nutritious as freerange grown. Then there’s practical reasons. Immense amounts of resources are used in meat production, from water (Approximately 75 per cent of the available freshwater in the world is being used by agriculture) to land (If the world’s population today were to eat a Western diet of roughly 80 kilograms of meat per capita per year, the global agricultural land required for production would be about 2.5 billion hectares – two thirds more than is presently used).

You might be convinced to try the lab grown hamburger, but wait till you taste it. Unsurprisingly, according to the reviewers, it’s not the tastiest burger you’ll ever get the chance to eat – to say the least! The team comprised of Chicago food writer, Josh Schonwald, nutrition researcher, Hanni Rützler, and a chef, Richard McGeown, actually cooked the burger in front of a live audience of journalists. 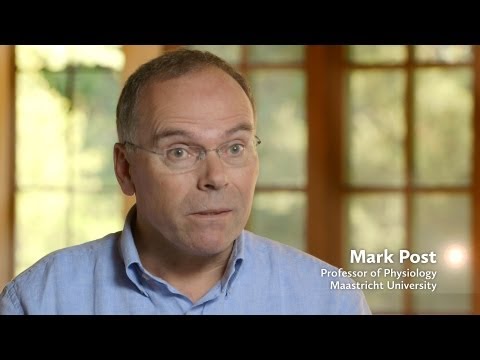 For one, you might be discouraged by the fact that it doesn’t look like meat (the lab grown meat doesn’t have any blood). No problem, just add some beet juice and saffron for coloring – good, looks like meat now. It also cooked like meat, behaving like its natural counterpart in the frying pan. The thing is , though, it also lacks fat, which is greatly responsible for the flavoring meat eaters cherish. Rützler and Schonwald agreed the texture was very meaty but lean and not terribly juicy.

In all, definitely not ready for the grocery store, but promising enough for a first public attempt. In the future, Post noted that he and his team will work on adding fat, remove antibiotics and fetal bovine serum. The concept has been proved, it’s now time to perfect the process. Of course, if you can culture cow meat, you can just as well do the same for pork or chicken. The researchers warn however that it might ten to twenty years before the first artificial meat might heat groceries stores.