by Alexandra Gerea
in Diseases, News
Reading Time: 2 mins read
A A
Share on FacebookShare on TwitterSubmit to Reddit

A few days ago, the health minister in Colombia warned that the country is extremely vulnerable to the Zika virus that’s spreading like wildfire through South America. He was right, as it turns out. Over 2100 pregnant Colombian women are already infected, as Zika has already been confirmed in 23 countries and territories in the Americas – including the US. 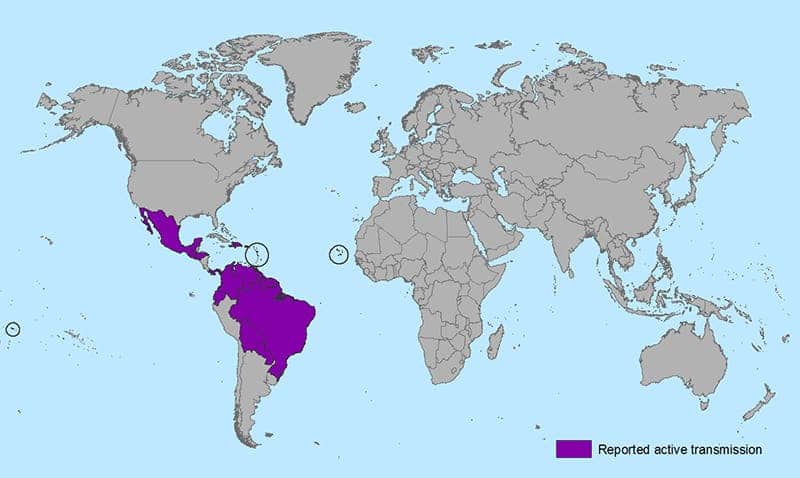 Zika virus, related to Dengue and Yellow Fever is spread through mosquito bites. The most common symptoms of Zika virus disease are fever, rash, joint pain, and conjunctivitis (red eyes) – usually mild symptoms that don’t require hospitalization. However, pregnant women are extremely vulnerable to the disease.

In December 2015 when the disease began to spread massively in South America, medics started to suspect that the disease can cause microcephaly – an abnormally small development of the head (for babies). In December 2015, the European Centre for Disease Prevention and Control issued a comprehensive update, warning that Zika is associated with babies with birth defects and poor pregnancy outcomes. The U.S. CDC issued a similar warning, adding that we don’t know yet how many of the microcephaly cases are associated with infection:

However, if possible – precautions should come first. Several governments have already warned women in infected countries to avoid, if possible, getting pregnant; even traveling (as a pregnant woman) to one of these countries. The Colombia government has urged women to delay getting pregnant at least by 6 weeks. Brazil is currently the worst hit country, with over 3,700 cases of microcephaly strongly suspected to be related to Zika.