Humanity is close to eradicating the first disease since smallpox: the dreadful Guinea Worm

It's a horrific disease, but one that may be going to the history books soon.

Dracunculiasis, commonly referred to as the Guinea Worm disease could be soon going extinct. In 2015 there were only 22 reported cases, down from 3.5 million in 1985.

Dracunculiasis is only diagnosed when observing worms emerging from the lesions on the legs of infected individuals and by microscopic examinations of the larvae. Just imagine, worms nearing a meter in length can emerge from the skin around your body, creating lesions as they move through the body. Female worms cause allergic reactions and severe pain, potentially leading to arthritis or even paralysis; only when the worm is cut and removed from the body is the healing complete.

In the mid 1980s, 3.5 million people were suffering from this horrible disease, especially in the poorer parts of Africa. Today’s progress is mostly owed to the Carter Centre, a charity set up by Jimmy Carter, a former president of America.

The disease is caused by the Guinea worm, which only infects humans and dogs – two hosts which can be monitored closely; this makes the disease a good target for eradication. The Carter Centre wanted to take advantage of the fact that wild animals don’t spread the disease, and so they did.

The worm larvae normally become infectious only if swallowed by copepods, tiny crustaceans which live in stagnant water. If someone drinks this water, they become infected. The worms then migrate inside the body, moving towards there legs. 90% of all worms emerge from beneath the skin through the legs. As sufferers try to relieve their pain, they put their feet in cold water which they then throw away – further spreading the disease. This cycle had to be broken.

Breaking the cycle meant two things: stopping the larvae from reaching the water, and stopping people from drinking the water. In order to do this, they first trained volunteers to spread awareness and treat people with worms hanging out. It was a nasty job, but 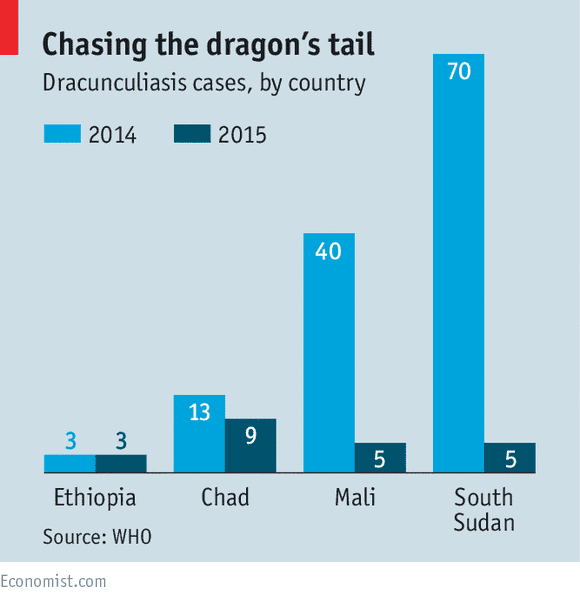 one carried out diligently year after year. They also started distributing water filters, both cloth-like filters for drinking buckets and straw-like filters equipped with a string, so that they can be worn around the neck. These filters stop block the copepods. The effects were visible, but infection didn’t cause immunity and people often got sick over and over again. In drier areas just south of the Sahara desert, cases emerged right after the rainy season. In areas with lakes and ponds, the disease emerged stronger in the dry season, as they were getting dryer and dryer. It was almost an uphill battle.

But with close monitoring and constant intervention, the progress was visible. When manufacturers also started donating larvicide, substances to clear the water of larvae, the number of cases slowed down – slowly but constantly.

Jimmy Carter was actually pivotal to this development. Not only did he invest money and spread awareness about this, but he and his wife have traveled to many infected villages, talking to doctors and health ministers, using their status to promote fighting the disease. He also personally negotiated the longest humanitarian ceasefire in history: the six-month “Guinea worm ceasefire” in Sudan, which was used to distribute filters, and also medicines and vaccines for other diseases.

There was a minor outbreak in a village in Chad, where people became infected by eating fish instead of drinking water, but again – volunteers were quick to react. Before 2010, Chad had not reported any indigenous cases of guinea worm in over 10 years. Hundreds of dogs also became infected this way but this is basically the only place where the disease hasn’t been kept fully under control. Even so, there were only 9 human cases.

If the Guinea worm disease is eradicated, it would only be the second human disease in this situation after smallpox.