Since the U.S. Congress passed the Clean Air Act in 1963, the issue of air pollution has remained embedded in American consciousness. Regardless of national and global awareness, most Americans haven’t realized how air pollution affects human health or the degree of its impact, even with seemingly marginal exposure. An estimated 92 percent of the global population live in areas with dangerously high levels of air pollution.

Environmental scientists worldwide are working toward long-term solutions to the problem of air pollution and human health effects. Countries and communities must understand the extent of the impact, where it’s most concentrated, and what must be accomplished at government and individual levels to reduce population exposure.

IMPACT OF AIR POLLUTION ON HEALTH

While most of the world’s population focuses their attention on global terrorism and economics, scientists are becoming increasingly alarmed at how air pollution affects human health. Research indicates that 5.5 million people around the globe die prematurely every year due to indoor and outdoor air pollution.

People suffer both short-term and long-term health effects from air pollution, causing diseases and complications in nearly every system of the body. Some of these include:

The EPA has narrowed air pollutants down to six major offenders found in varying degrees in cities around the world. 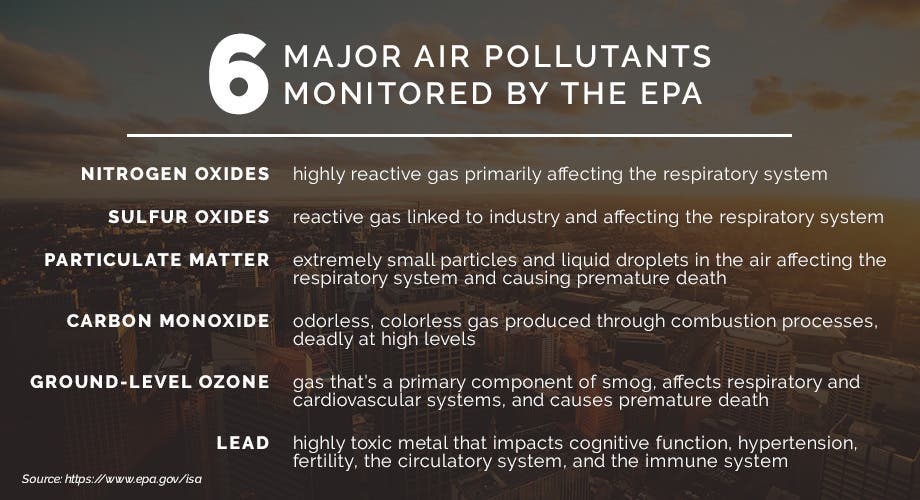 LOCATIONS WITH AND CAUSES OF HIGH LEVELS OF AIR POLLUTION

According to an article published in the Journal of Research in Medical Sciences, low-quality vehicle fuel, usually gasoline and oil, have been found to emit greater amounts of polluting gas. This is especially true when they are used in engines that don’t meet emissions standards. Because of this, initiatives have long been underway to replace diesel and gasoline with cleaner sources of energy, such as liquified natural gas and alcohol.

It’s not just vehicles that contribute to poor air quality, though. Air pollution rises proportionately to population and industry, and it’s also affected by weather patterns and natural disasters.

According to the American Lung Association’s 2018 State of the Air report, the top five most polluted cities by ozone air pollution are:

The lists organized by year-round and short-term particle pollution include the same cities at different rankings, except for Sacramento. It is replaced by Fairbanks, Ala. as the No. 1 and No. 4 city, respectively.

Of the 5.5 million people around the world who die prematurely each year due to air pollution, more than half of them occur in China and India where rapidly growing economies outpace environmental efforts. Six of the top ten cities ranked for high levels of air pollution are in India, while China’s clean air efforts have kept their cities off the top ten list.

PROTECTING YOURSELF FROM AIR POLLUTION

As governments and scientists work together to find solutions, you can educate yourself about air pollution and human health in your area. According to the Journal of Thoracic Disease, these steps can be taken to reduce individual exposure to air pollutants.

If your passion for the environment extends beyond staying abreast of the latest developments, consider earning an Online Environmental Studies Degree from Virginia Wesleyan University. Our program is ideal for those who want to help make a lasting impact on the future and improve humans’ relationship with the environment. We’ll equip you with the interdisciplinary courses and real-world skills required to excel in the workplace. Earn your degree on a flexible timeline that fits your schedule, often in as little as 12 months.

This article was originally published on the website of Virginia Wesleyan University and was re-posted with permission.