Vietnamese Oral Vaccine for Cholera is highly effective in Africa

by livia rusu
in Diseases, News
Reading Time: 2 mins read
A A
Share on FacebookShare on TwitterSubmit to Reddit

A new, inexpensive and easy to use vaccine developed in Vietnam worked very well during a cholera outbreak in Africa, Doctors Without Borders reported. 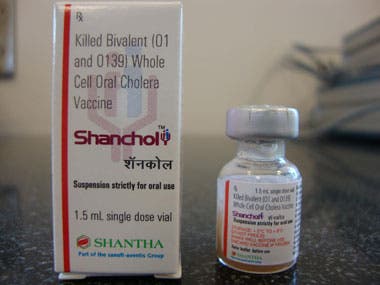 Cholera is an infection of the small intestine caused by the bacterium Vibrio cholerae. It is generally transmitted through through food or water. In the developed world, the main cause is sea food, but cholera is most dangerous in the less developed world – especially in Africa, where it is spread through water. Cholera affects 3–5 million people worldwide every year. Needless to say, a vaccine (especially a cheap one) would do wonders.

This is where Shanchol kicks in. Shanchol was invented in Vietnam and produced in India, and it provided 86 percent protection against cholera. The study documenting the efficiency was conducted by Epicentre, the research arm of Doctors Without Borders, and the Health Ministry of Guinea; it was published in The New England Journal of Medicine last month found.

Until now, one of the main medicines against Cholera was Dukoral, made by a subsidiary of Johnson & Johnson. However, Dukoral costs over $5 and was generally aimed at the developed world. It is also highly acidic, so it should also be taken with a glass of alkaline soda to protect the stomach.

However, on the other hand, Shanchol is almost 3 times cheaper, costing less than $2, it comes in a small vial, it’s easier to produce, and it doesn’t have any adverse effects on the body. If produced in sufficiently large quantities, it could even go below the $1.

The vaccine was developed in a partnership with the Bill and Melinda Gates Foundation. It took quite a while for the WHO to incorporate cholera vaccines (2010), but now, this seems like the clear way to go. Cheap, easy to produce and take vaccines could do wonders and save over a hundred thousand lives every year.