Despite a struggling economy, Italy has the healthiest citizens in the world

Money is hard to come by these days in Italy but at least people have their good health.

According to Bloomberg’s health index, Italians are much healthier than Americans, Canadians or Brits, who all live in much more prosperous countries. A baby born today in Italy can expect to live 80 years.

There are a couple of things that can explain the Italian healthy lifestyle. For one, Italy is a developed country with good access to education, health care, and a sound infrastructure. It’s just that the last decade was particularly bad for the peninsula’s economy. Secondly, the famous Italian food rich in Mediterranean produce has been time and time again proven to be among the healthiest. Previously on ZME Science, we wrote about how a Mediterranean diet improves memory, keeps the body young and prevents heart disease. Lots of veggies sprinkled in extra virgin olive oil seems to be important.

Traditionally, Italians also often enjoy a glass of wine with their evening meal and generally avoid binge drinking. According to BBC Good Food, moderate drinking of wine (1-2 glasses a day) is good for the heart. It’s also worth noting that a 2016 study found that pasta — arguably Italy’s most recognizable export, maybe second only to pizza — is not fattening and could actually help lose weight.

Contrary to other developed countries from Western Europe, Italy has a surplus of doctors. In fact, one of the longest running local TV shows is called  “A Doctor in the Family.”

As for the United States, it scored rather poorly with an index of 73.05 out of 100 placing it #34 on the list. Its health score has been brought down by the high incidence of obesity which plagues the country. In America’s poorest states — Louisiana, Mississippi, Alabama and West Virginia — 35 percent of the population is obese.

Israel is the highest ranked country in the Middle East, Chile in Latin America, and Slovenia in Eastern Europe. On the opposite end, the most unhealthy people live in Sierra Leon where a baby born today shouldn’t expect to live past age 52. 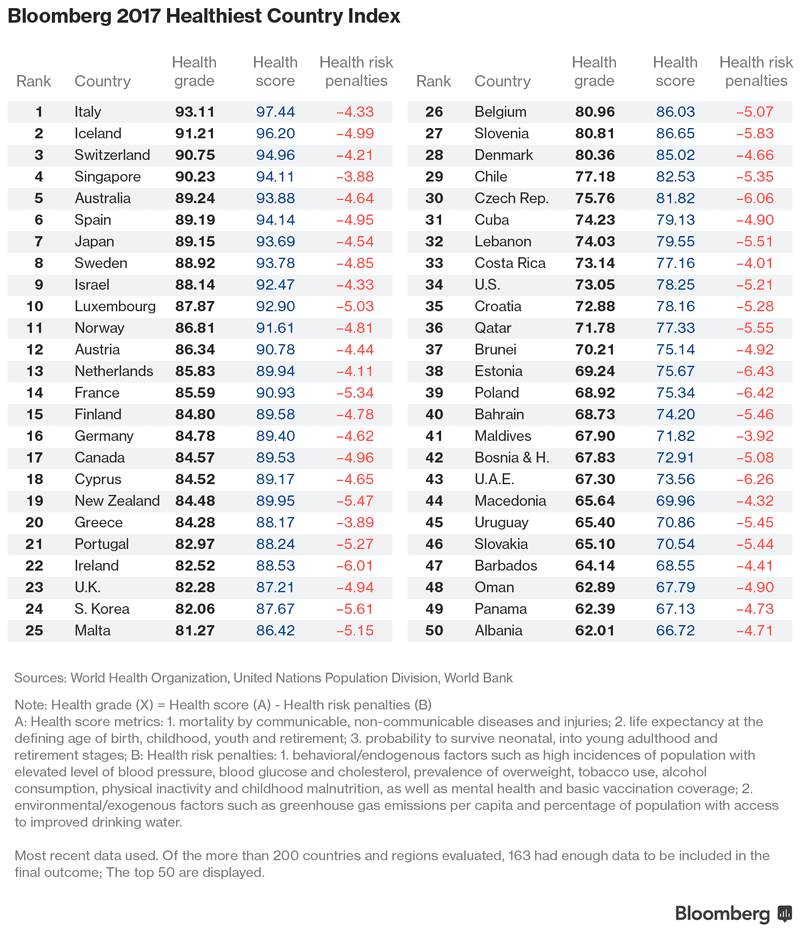