Hallucinogenic tea brewed from South American plants might treat depression, according to a new study - but don't start your homebrewing just yet; it's a small study, and there are still unclear aspects about it.

Hallucinogenic tea brewed from South American plants might treat depression, according to a new study – but don’t start your homebrewing just yet; it’s a small study, and there are still unclear aspects about it. 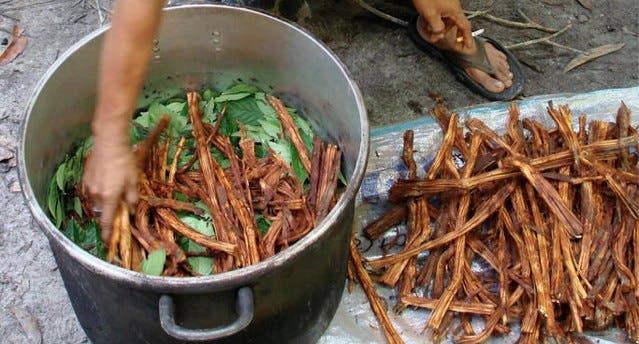 Deep in the Amazonian basin, experienced shamans prepare a natural tea called ayahuasca to bring its drinkers to hallucinogenic states of revelation. Ayahuasca, commonly called yagé, is brewed from Banisteriopsis caapi vine, often in combination with various other plants. It’s sometimes mixed with Chacruna or Chacropanga, dimethyltryptamine (DMT)-containing plant species. But it’s not just South American tribes that are enjoying Ayahuasca – people from all over the world enjoy and endorse it, including the likes of Lindsay Lohan and Sting. Now a team of Brazilian researchers is investigating its use as a weapon in the fight against depression.

In the study, researchers gave doses of ayahuasca to six participants with depression for whom commercial antidepressants hadn’t been effective. They found that the symptoms of depression decreased quickly after consumption (about three hours in), and lasted for long periods of time. When they were tested again after three weeks, the positive changes were still in effect. There were no reported negative side effects.

Naturally, these are some exciting results, especially when you consider that depression affects millions of people every year in the US alone – but there are some issues with this study. First of all, it’s a really small sample size. Six people is encouraging, encouraging enough to conduct a bigger study, but not big enough to draw some definite conclusions. Second of all, there was no control group – which is the gold standard when it comes to medical research. The problem is that the psychedelic tea is illegal in many countries – even when it comes to research. But researchers claim they’ve passed that hurdle and they’re now working on to design a bigger and broader study.

So what do you think? Would you use, or recommend the use of ayahuasca, or other hallucinogens in dealing with mental disorderws?