Peruvian engineers create water out of thin air through billboards 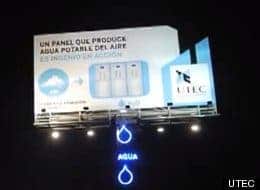 The Peruvian capital of Lima, along with its outskirts, is plagued by a vicious drought, which coupled with pollution and unsanitary water extraction methods, has made the water there stagnant, dirty and dangerous. Doing what they know best – fix problems – engineers at Peru’s University for Engineering and Technology have devised an resourceful system that sucks up the moisture out of the air and turns it into clean, drinkable water. To make sure the populace is aware of this, they’ve installed the system under the form of a double paneled billboard which is sure to highlight there is safe water to be found at the location.

“If the problem is water, we’ll make some,” said Alejandro Aponte, one of the people who worked on the project, which was both an engineering feat and a marketing challenge.

The engineers had to think of a way to build a system that’s able to suck enough water from the air, while at the same time letting people know there’s water readily available. Engineers part of the project have installed five generators to suck moisture out of the air and convert it into liquid. The system requires at least 30% moisture in the air for it to be effective, something of the least worry since Lima and its vicinity are often soaked in an unbearably sticky 98 percent, despite the barren landscape where there is very little evident vegetation and not very much actual rainfall.

The UN and other global leaders have recently called for greater solutions to the water crisis, as projections point to the fact that about 60 percent of the world’s population will be living in cities in the next eight years, adding more strain on sanitation systems and resources. In Lima, one million of the more than eight million people lack reliably clean water.

The whole system was then sandwiched  between two huge billboards which advertise the availability of the water. The system produces some 100 liters of water per day, and given the sounding success the Peruvian engineers are currently discussing ways to implement it through the city, country and even overseas.

“We have seen that this has a huge potential if you get to use it in other areas of Lima, or even other countries that have many water problems,” said Aponte, who said he has received overseas queries about the project.

Now, this is the kind of advertising that we really enjoy and support. Less TV shows, Victoria’s Secret and McDonald’s, more water please.