by Mihai Andrei
in Climate, Environmental Issues
Reading Time: 2 mins read
A A
Share on FacebookShare on TwitterSubmit to Reddit 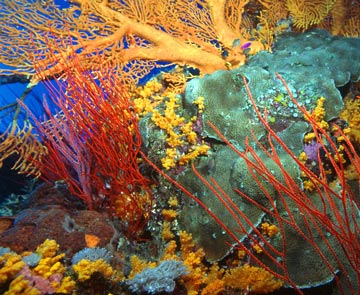 After things seemed to be going a bit towards the right way, when fishing was banned in the 2nd largest coral reef in the world, a new study pointed out the fact that not a single square meter in the oceans has been left untouched by man’s activities. Corals are especially threatened, and protecting them is vital, as 200 million people depend directly on them to subsist, and several billions are affected by the destruction of coral reefs.

The thing is that between the corals and the zooxanthellae (tiny one-celled plants) is not only powerful enough to create the largest living organism on the planet, the Great Barrier Reef, but also underpins the economies and living standards of many tropical nations and societies who harvest their food from the reefs or have developing tourism industries. The issue is whether this weird yet magnificent partnership is strong enough to resist the threats mankind rises.

“It’s an incredibly intricate relationship in which the corals feed the algae and try to control their diet, and the algae in turn use sunlight to produce “junk food” – carbohydrates and fats – for the corals to consume.
“Where it all breaks down is when heated water lingers over the reef and the corals expel the algae and then begin to slowly starve to death. This is the bleaching phenomenon Australians are by now so familiar with, and which is such a feature of global warming.”

“In other words, how robust this symbiotic system is and whether it can withstand shocks from warming, ocean acidification, changes in sunlight levels and other likely impacts from human activity.
“The bottom line here is the survival of the Great Barrier Reef and coral reefs the world over.”