Coral bleaching has been captured on video for the first time

They don't seem to be having a good time.

Scientists have filmed coral bleaching in action for the first time. The good news is that it looks kinda funny. The bad news is that it’s faster and more severe than we imagined — and with most of the world’s coral colonies critically damaged, destroyed, or soon to be so, we’ve got a huge problem on our hands.

The term “coral bleaching” describes a behaviour seen in environmentally-stressed bodies of coral. It’s so called because the organisms lose their colour when the waters they live in become too hot or polluted.

Corals are usually white-ish or cream coloured. The dazzling colours of a coral reef are produced by tiny, pigmented algae that live within the corals and trade nutrients for the safety of the colony. This symbiotic relationship benefits both parties, but in an emergency, the coral aren’t shy to kick their algae buddies to the curb — they expel the algae and lose their pigment, becoming bone-white.

While this last-ditch effort allows the coral to survive in the short run, it will die if conditions don’t improve fast enough so new algae can move in.

“What’s really interesting is just how quickly and violently the coral forcefully evicted its resident symbionts,” says Brett Lewis from the Queensland University of Technology in Australia.

Lewis’s team wanted to understand what causes corals to evict their simbiotic bacteria, and has been observing bleaching in the coral species Heliofungia actiniformis. They placed a number of H. actiniformis corals and Symbiodinium algae in a controlled environment, heated them up, then observed and recorded their response to rising temperatures.

The team raised water temperature from 26 to 32 degrees Celsius (78 to 89 degrees Fahrenheit) over the first 12 hours of the experiment, then kept it constant over the next eight days. The corals weren’t pleased at all by this turn of events, and they basically farted the color out of themselves. 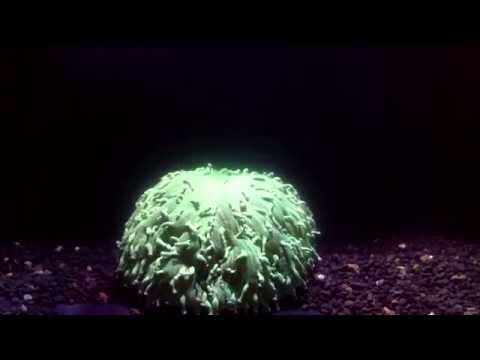 “The H. actiniformis began ejecting the symbionts within the first 2 hours of us raising the water temperature of the system,” says Lewis.

“Our H. actiniformis used a pulsed inflation to expel Symbiodinium over time – inflating their bodies to as much as 340 percent of their normal size before suddenly and violently contracting and ejecting Symbiodinium through their oral openings over the four to eight-day duration of the experiments,” explains co-author Luke Nothdurft.

Even more unsettling is the fact that the researchers chose H. actiniformis because it’s one of the most resilient species of coral found in the Great Barrier Reef. This solitary species of mushroom coral can grow to about 20 cm in diameter and 7 cm in height (7.8 by 2.7 inches,) on a diet of sugars synthesized by Symbiodinium and zooplankton that it catches with its tentacles. Previous studies have found that H. actiniformis is very resilient to thermal stress, and Lewis and his team now think this could be because of its incredibly quick response.

“Our observations suggest this resilience could be due to the rapid expulsion of the coral’s algal symbionts during thermal stress, and could very well increase H. actiniformis’s chance of survival during abnormally high sea temperatures,” he says.

But the findings have some pretty grim implications. Basically, we found out that one of the hardiest species of coral in the Great Barrier Reed owes its survival ability to the fact that it’s willing to sacrifice its nutrient source earlier than other species — and that’s not good news at all. Hopefully, the findings will help mobilize governing bodies to create policies to give out remaining coral reefs a fighting chance.

The full paper, “Expulsion of Symbiodinium by pulsed inflation under hyperthermal stress in Heliofungia actiniformis” has been published in Coral Reefs.