This Wednesday, Sen. Marco Rubio, New Jersey Gov. Chris Christie, and Wisconsin Gov. Scott Walker were engaged in a two hour long debate on CNN. In 120 minutes, climate change was only treated for three minutes, which to me is saddening since it shows the moderators care as little about the effects of climate change on this country and the world at large as the Republican Presidential candidates.

by Tibi Puiu
in Climate, News, World Problems
Reading Time: 7 mins read
A A
Share on FacebookShare on TwitterSubmit to Reddit

This Wednesday, Sen. Marco Rubio, New Jersey Gov. Chris Christie, and Wisconsin Gov. Scott Walker were engaged in a two hour long debate on CNN. In 120 minutes, climate change was only treated for three minutes, which to me is saddening since it shows the moderators care as little about the effects of climate change on this country and the world at large as the Republican Presidential candidates.

There’s some good news: the three candidates all seem to acknowledge climate change is real and caused by man-made activities, marking a shift from downright science denialism. This was predictable considering more and more Republican voters think climate change is real. The bad news is that even though they admit climate change is an issue, all three candidates believe it is useless to act in a meaningful way since it won’t make any difference. “America is a lot of things – the greatest country in the world, absolutely. But America is not a planet,” said Sen. Rubio. But admitting you have a problem and the only solution you see is doing nothing can only be labeled as bad leadership, in my book.

Rubio’s response came after the debate’s moderator Jake Tapper mentioned George Shultz plans under the Reagan administration to take action against climate change ‘as an insurance policy’. It’s basic risk management after all – if something unlikely, but not impossible, could significantly affect life on this planet (which includes America, Sen. Rubio) it makes sense to take action. It would be stupid not to, in fact. All three candidates disagreed that such an insurance policy is warranted. Moreover, all three basically echoed the same message: climate change is real, but it’s useless to do anything since the impact would be minimal; even worse, it will hurt the economy (how many times have we heard this?).

“Here’s the bottom line,” Rubio answered. “Every proposal they put forward will make it harder to do business in America. Harder to create jobs in America. Single parents are already struggling across this country to provide for their families. Maybe a billionaire here in California can afford an increase in their utility rates, but a working family in Tampa, Florida or anywhere across the country cannot afford it.”

“We are not going to destroy our economy, make America a harder place to create jobs, in order to pursue a policy that will do nothing, nothing to change our climate, to change our weather,” Rubio added.

“I think what Senator Rubio said I agree with – that in fact we don’t need this massive government intervention to deal with the problem. Look at what we’ve done with New Jersey – we’ve already reached our clean air goals for 2020,” Christie said. “I agree with Marco. We shouldn’t be destroying our economy in order to chase some wild leftwing idea that somehow us by ourselves is going to fix the climate. We can contribute to that and be economically sound.”

“We’re going to put people – manufacturing jobs – this administration is going to put them at risk,” Walker marched on to the same drum beat.

This reflects a transformed, moderate view on climate change: less science denialism, but more distracting. None of the three candidates come close to Carly Fiorina, another GOP Presidential candidate, who although was no present at the debate had her own ‘5 minutes of climate change fame’ in an interview with Katie Couric. Fiorina dangles the same rhetoric, only a lot sneakier. “I think we have to read all the fine print,” Fiorina said when asked what her position on climate change is. And then it goes on: “one nation, acting alone, can make no difference”, “environmental regulations destroy lives and livelihoods”, “China could care less…”,”The solution is innovation, not regulation”, “Do well tell people the truth, that [wind turbines] slaughters millions of birds every year? I mean, eagles, falcons…” (hilarious!) “[…]does anyone see how, honestly, unsightly those huge wind turbines are, in some of the most beautiful hills? In other words there is no magic answer, there is no perfect source of energy.” (what?!) “Solar energy takes up huge amounts of water” and so on before pitching “clean coal” as a sound energy policy.

Coal, really? Natural gas, I can understand, but coal? Coal is the dirties source of energy and, in the US, the most uncompetitive on the market, with or without regulations – nevermind subsidies. Dissing wind turbines because they kill eagles and falcons in favor of “clean coal”, which is an absurdity, or because they ruin the view is downright propaganda. Let’s look on how many birds wind turbines kill.

Wow! It doesn’t take a genius to spot how absurd Fiorina is. The American Lung Association and the Clean Air Task Force (CATF) claims that 13,000 people die each year from coal pollution–down from 24,000 in 2004, when less pollution regulation was enforced. In addition to the premature deaths, CATF estimates that every year coal pollution is responsible for 12,000 emergency room visits, 20,000 heart attacks, and over 200,000 asthma attacks. Elsewhere:

The biggest concern the GOP raises over climate change, however, is that by enforcing a clean energy policy the American economy will suffer, all without having no impact since climate change is a global phenomenon. The US is just a puny country after all, and mighty China is the world’s largest CO2 emitter. In fact, China is so happy that the US is ruining its economy on a futile matter.

While it’s true China is currently the world’s most important greenhouse gas emitter, historically the US has polluted the most. Since the mid-1800s, the US has spewed 29% of all man-made CO2 into the atmosphere. That’s  328,000 million metric tons, more than any country, and  three times the amount emitted by China over the same period. On a per capita basis, China isn’t in the top 10 emitters. The biggest CO2 emitter per capita is Canada, closely followed by the US and Russia.

So, it’s not only reasonable to the US – the most powerful country in the world – to set an example, but it’s also obliged too based on the burden it has caused to the world. 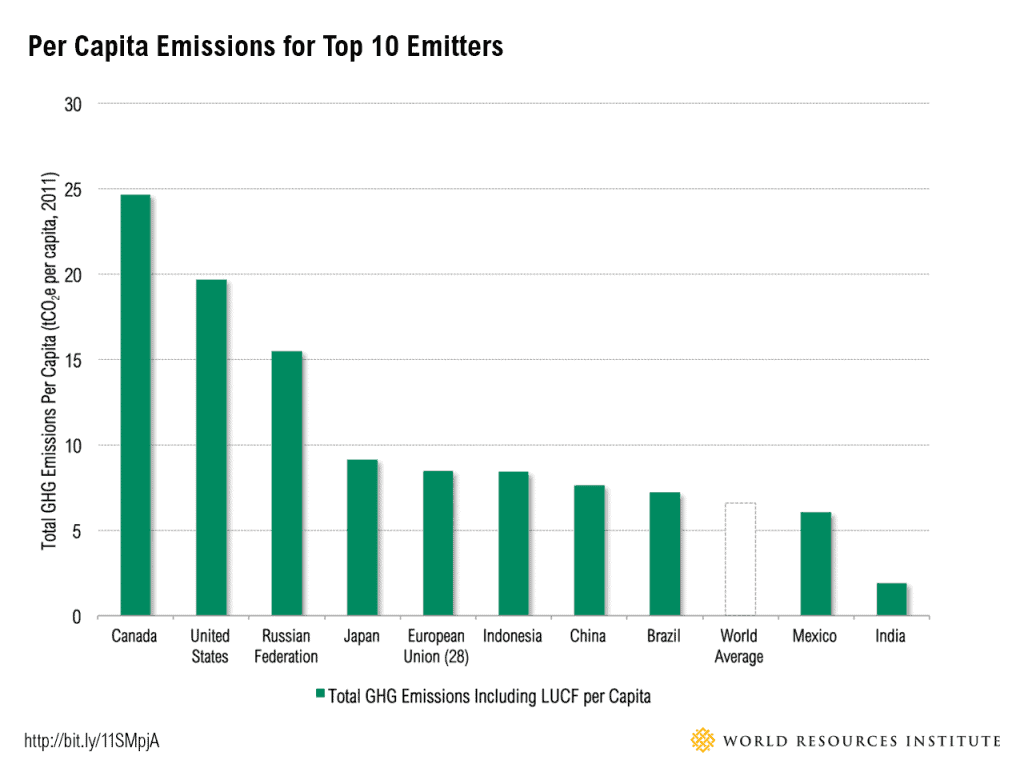 Regarding jobs, the renewable energy sector is generating more jobs than fossil. As for China, its emissions are actually falling. Care to guess how? By scrapping coal. China has the world’s third-biggest installed capacity of solar power, with 8.3GW of solar photovoltaic capacity at the end of 2012, an 8 per cent share of global capacity according to industry figures. Germany is the leader with 32.4GW, nearly a third of worldwide capacity. Italy is second with 16.3GW while the US has 7.7GW. In 2015, China should quadruple its solar power installations to 35 gigawatts, which would make it the world’s top producers of solar energy. Moreover, far from being in competition, the US and China are actually partners as both countries have drawn mutual goals to reduce their emissions. In other words, it’s all plain intoxication. For a complete debunking of Fiorina’s interview, visit VOX.

It’s interesting, at least, to see how Republican candidates shift their stance on climate change along with public opinion. Of course, this is second nature to any career politician, left, right, center, north, south, whatever. The rhetoric, however, is getting far more sophisticated. Fiorina, for instance, actually sounds convincing in some parts, were it not utter BS. It’s all a lot more sneaky.