No, global temperatures aren’t “plunging” – fake news is acting up

What can go wrong when loudmouths spread fake information?

by Mihai Andrei
in Climate, News
Reading Time: 5 mins read
A A
Share on FacebookShare on TwitterSubmit to Reddit

Scientists were shocked to see the House of Representatives Committee on Science, Space, and Technology tweeting a Breitbart News article with the headline “Global Temperatures Plunge. Icy Silence From Climate Alarmists.” This is disturbing for several reasons. For starters, it showed the House taking a partisan position on climate change, a scientific issue on which there is a virtual consensus. Secondly, it’s propagating the views of Breitbart News – the alt-right mouthpiece known for racist, misogynistic, and overall misleading articles, and perhaps more importantly – that’s just bad science and fake news.

Cracking down on fake science

They say a lie can travel halfway around the world while the truth is putting its pants on. Unfortunately, this is too often the case. Articles like these are lazy, false, and dangerous – but they tend to be picked up a lot, especially on social media. It all started with David Rose of the Daily Mail last week, who stated that global land temperatures have plunged by more than 1C since the middle of this year. But this is not only false and misleading, it’s also pointless: 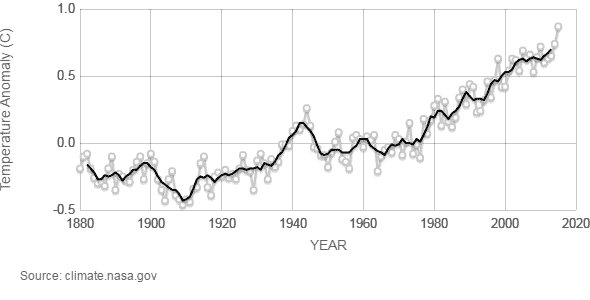 Of course, the climate change denier groups loved it and were all over it, exaggerating and misrepresenting things even more. The Breitbart article largely quotes the Global Warming Policy Foundation located in the United Kingdom. As it turns out, they’re a group of climate change denial advocates funded by anonymous donors. Although one major financier has been revealed: Sir Michael Hintze, a hedge fund founder who is a prominent member of England’s Brexit-climate-denier cabala.

Scientists across the world quickly replied to the news.

He went on to explain how articles like this can make a seemingly convincing case while ignoring very crucial aspects of climate science.

“The temperature goes up for a couple of years and we have the largest year on record, then it goes down and it reaches a level that’s still well above 20th-century historical averages,” he said. “That in no way disproves anything about the causes of the long-term temperature trends.”

The planet is getting much hotter, and we’re seeing signs of this year after year. To put things into perspective, even with this drop in December, Earth is getting significantly hotter year after year – 2014, 2015 and 2016 were respectively the hottest year on record, as Michael Mann, a climate scientist at Penn State University explains:

“Three consecutive record-breaking warm years, something we’ve never seen before, and a reminder of the profound and deleterious impact that our profligate burning of fossil fuels is having on the planet,” he told the Guardian.

But as if it wasn’t troubling enough that big media is picking up articles like this, an official institution picking it up and sharing it is simply unacceptable. As Mann says, it can only be seen as a deliberate effort to fool the public.

“For anyone, least of all the House committee on science, to at this particular moment be promoting fake news aimed at fooling the public into thinking otherwise, can only be interpreted as a deliberate effort to distract and fool the public.”

The best thing to come out of this is Senator Bernie Sander’s response. The Vermont representative stated:

Where’d you get your PhD? Trump University? https://t.co/P5Ez5fVEwD

The Trump administration is not even in office and yet we’re already seeing ripples of its effect. Donald Trump has often spoken against climate change, claiming it to be a “Chinese invention.” His staff also comprises mostly of climate change deniers and people who have a long history of promoting fossil fuel energy at the expense of clean renewables.

[NOW READ] Here’s how Trump might bring the U.S. back to the climate ‘dark ages’