Here’s how Donald Trump might bring the U.S. back to the climate ‘dark ages’

President Trump could be a disaster for the climate.

Seemingly against all odds, Republican Donald Trump was elected the 45th president of the United States on Tuesday. This was the culmination of perhaps the most polarizing, populist, and downright nasty campaign in the history of the nation. Now that he’s been elected, Trump has a pretty long list of campaign promises that he needs to address once he takes the seat of the Oval Office. Some of these are pretty worrisome like enforcing strict immigration and deportation policies for Muslims and Mexicans, repealing Obama Care or — his most famous campaign promise — build a ‘big, beautiful’ wall between the U.S. and Mexico. But right now, here in Marrakech, Morroco, where the 22nd Conference of the Parties on climate change is held, there are other reasons to be concerned.

Trump has made it very clear that he is no friend of the fight against climate change. Actually, he has gone as far as calling climate change ‘a hoax’ and ‘a Chinese invention.’ That’s in stark contrast to the eight years of Obama’s presidency, characterized by initiative, diplomacy and energetic efforts to unite the world under the common good of reducing greenhouse emissions, smarter energy use, and a push for renewable energy. But Trump simply called Obama’s remarks that climate change is a pressing issue “one of the dumbest statements I’ve ever heard in politics”.

That being said, Trump and his cabinet risk pulling America back into the ‘dark ages of climate awareness’, reverting to a situation similar to the pre-Obama days, which is making everyone in Marrakech rightfully depressed. Here are just a couple of ways this could happen.

Last year in Paris for COP21, the United States was one of the leaders of the talks pushing for ambitious targets. At the end of the event, more than 190 countries signed climate pledges that will see them reduce or cap their emissions on a case by case basis to limit global warming to around 1.5 degrees Celsius and no more than 2 degrees Celsius. As part of the pact, the United States vowed to reduce emissions by 26–28% of 2005 levels by 2025.

The Paris Agreement is not legally binding, however, which means there is no ‘climate police’ to enforce these targets. Instead, there’s a sort of diplomatic agreement that pressures each country to carry its own weight. So, it’s critical to have a couple of leaders, like the United States, China or the European Union, to inspire everyone else.

For COP22, held during the third consecutive year of record-breaking heat, the aim of the conference is to prepare for action by drawing the necessary measurable frameworks. Ironically, one of the most important players of Paris, the United States, might actually retire from this action plan after the event is over.

Congress, which is mostly made of Republicans who have committed to blocking any climate legislation, was never asked for permission for the U.S. to join the Paris pact. Instead, the Obama Administration used executive orders. These same executive orders could be canceled by the next President, Donald Trump, who publically said he would do so. He also said he would cut payments to the United Nations intended for climate change mitigation efforts.

Before Tuesday’s elections, leaders from China, Brazil, and France all publically urged Donald Trump to support the Paris agreement. There’s still no word out about Trump’s cabinet will do on the matter once they come to power, but many fear for the worse. Nevertheless, countries like China or the European Union block have reiterated that despite an eventual lack of U.S. support, they will continue their march towards carbon neutrality.

The Obama Administration’s Clean Power Plan is at the heart of the country’s commitment to the Paris agreement. It involves mandating power plants to reduce their carbon emissions and fosters renewable energy development. Trump, however, vowed to ‘kill’ the Clean Power Plan.

Following Trump’s win, the market took a plunge, among those hurt the most being solar companies like First Solar, Sun Power, and SunEdison.

“We continue to highlight the negative industry background on solar, and the election results should weigh even more on solar stocks. The Clean Power Plan (CPP) would have been a strong growth driver for the industry, but we believe it is unlikely to be implemented under a Republican White House. Importantly, we do not expect the Investment Tax Credit (ITC) to be rolled back, as the tax credit is unlikely to be changed retroactively. We expect a significant overhang on solar stocks due to negative sentiment trades and the oversupply in the industry. SPWR reports today after the close and we are cautious heading into quarter,” said  R. W. Baird’s Ben Kallo.

It seems likely that Myron Ebell, who is the director of the Centre for Energy and Environment at the conservative Competitive Enterprise Institute and a critic of CPP calling it ‘illegal’, will likely lead the EPA transition team. As one of his first duties, Ebell is expected to scrape the CPP. Ebell is also an avowed climate change denier.

The investment tax credit (ITC) extension that is set to last until 2020 but may not fare much better, PV Tech reports.

“The Trump Presidency and GOP-controlled Senate & House are meaningful negatives for US solar. Although the Trump team has indicated to our sources that it has no plans to roll back the ITC extension, our checks suggest the ITC could very well be on the chopping block at some point. The CPP is effectively dead. All in, tens of gigawatts of solar demand are at risk. We see another leg down for all solar stocks in our coverage universe,” according to fellow equity research firm Roth Capital Partners.

“One of Trump’s goals is to pursue tax reform and reduce the corporate tax rate to 15%. With the GOP controlling the executive and legislative branches, there is a meaningful probability that this develops momentum. One of our DC contacts suggested that when the Bush administration estimated the impact of eliminating all incentives and accelerated depreciation from the tax code, it could only get to a corporate tax rate of 29%. As a result, the Trump team will likely have to dig even deeper to get to 15%. We estimate that the value of the ITC is US$40-50bn, which is a large number that could pay for a corporate tax cut.”

Stopping the ‘war on coal’

The coal industry all over the world is tanking, but nowhere else as bad as in the United States. Coal companies, which spent $114m obstructing climate news in 2015 alone, are in a very, very bad shape. Thousands have been laid off, losses have amounted to billions and stocks have plummeted. For instance, Peabody Energy, the world’s biggest coal company, traded stocks below $1 when it used to be $72 in 2011.

One of Trump’s campaign promises is to unleash an energy revolution. He never mentioned renewable energy will be part of this strategy. Instead, coal seems to be on the menu.

Some bullet points from Trump’s energy campaign include.

It’s not clear year who will lead the Department of Energy under Trump’s leadership, but experts believe finding fresh talent to work with the agency will become difficult simply because no serious scientist wants to work in an Administration that doesn’t believe climate change is real. R&D for wind, solar, nuclear power, and electric vehicles  are all now under question since Trump vowed to “cancel all wasteful climate change spending.” His staff claims these amount to $100 billion over eight years.

“The figure combined an estimate of what the Obama administration had spent on climate-related programs, the amount of U.S. contributions to an international climate fund that Trump would cancel, and a calculation of what Trump believes would be savings to the economy if Obama’s and Clinton’s climate policies were reversed,” according to Bloomber BNA. 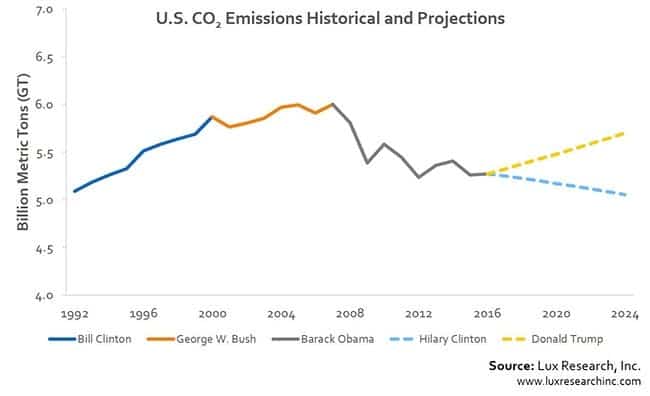 “It is quite possible that a Trump administration will spell devastation for environmental and climate regulation in the U.S., and to the public health and well-being of people, ecosystems and biodiversity around the world,” said Michael Burger, the executive director of the Sabin Center for Climate Change Law. “It is also possible that it won’t. Let’s hope that the responsibility of the office takes hold, and his obligations to current and future generations register once he has power.”

All in all, the election of Donal Trump, now a harsh reality for all of us who think climate change is an urgent priority for any leader, could be devastating for the planet’s future. But even if Trump is genuinely intended on setting ablaze everything good that came out of the Obama Administration in terms of climate, all is not lost. It is our duty, now more than ever, to be vigilant.