Americans are worried about climate change but, paradoxically, aren’t talking about it (and this doesn’t help at all)

When everyone is silent, nothing gets done.

A new report fresh out of Yale and George Mason University suggests that two-thirds of Americans are worried about climate change. Not all of them might recognize that the climate is changing due to human activities, but the good news is that they recognize it’s happening. The bad news is that they’re not talking about it. That’s, in part, because climate change is treated on the same level as politics, religion, or sex and makes for an uncomfortable conversion subject — that’s despite 99 percent of climate scientists agree that climate change is happening now, requires urgent action, and is caused by humans who spill greenhouse gases into the atmosphere.

Would you refrain from bringing science to the dinner table if this meant talking about gravity or black holes? The answer is likely ‘no’ for most people but rationally-speaking it’s very odd that the same doesn’t apply to climate change or, as sometimes happens, the theory of evolution.

It’s a paradox because, according to this most recent report, most Americans are aware and take interest in climate change. 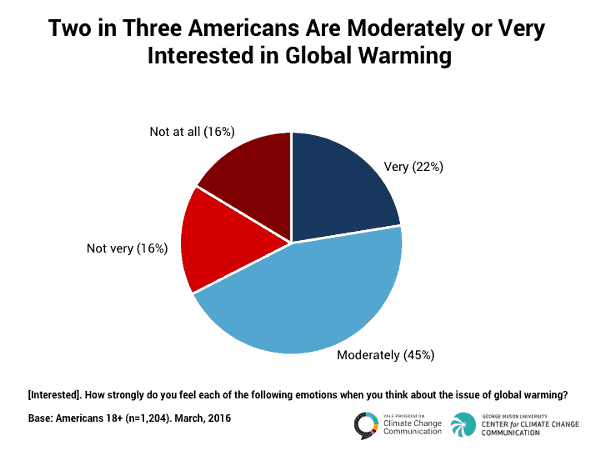 It’s not like climate change is an abstract ‘war in Syria’ topic — it’s something that they’re worried about and consider it affects them personally. 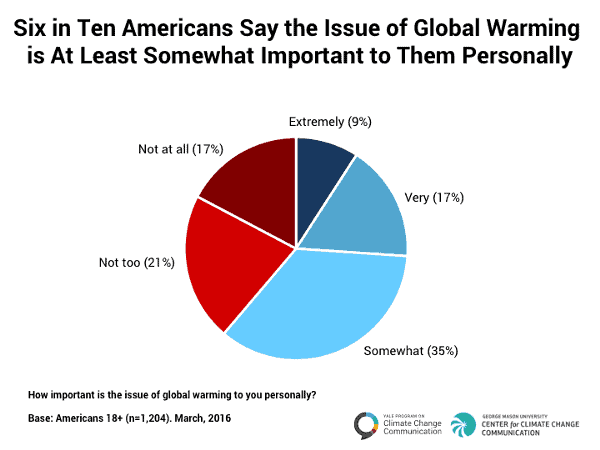 Yet despite all of this, few Americans openly talk about climate change with their friends, family, and peers. 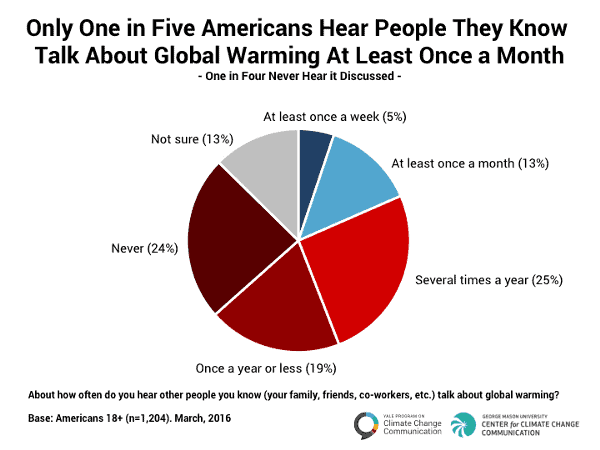 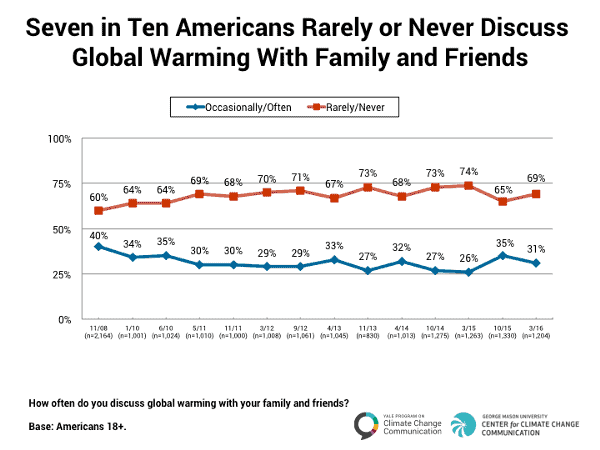 Why are Americans so afraid to talk about climate change? There’s reason to believe that many people think climate change is an unpopular opinion and speaking up might lead to ostracization or social isolation. No one wants to be ‘that guy’, even though the person sitting next to you might actually be ‘that guy’ too!

Sounds paradoxical? There’s a whole theory that describes this sort of behaviour and it’s called the spiral of silence. German political scientist Elisabeth Noelle-Neumann first coined the term in 1974 when she published work describing why people remain silent when they feel that their views are in opposition to the majority view on a subject. The spiral of silence explains, for instance, why so few people talked about Hitler during his spring years of coming into power in the early 30s.

For this theory to be plausible it relies on the idea that in a given situation we all possess a sort of intuitive way of knowing what the prevailing opinion happens to be. The spiral is created or reinforced when someone in the perceived opinion majority speaks out confidently in support of the majority opinion.

“Our sense is that most Americans don’t raise the issue in conversation because they want to avoid heated or drawn out conversations with people who may hold more extreme views than they do — one way or the other,” said Ed Maibach, professor of communications at George Mason University and lead author of the report.

Looking at the figures above, however, the majority’s opinion is that climate change is a cause of concern. Hmmm… so what’s going on?

“It’s a bit like the old adage that it’s impolite to discuss sex, religion, or politics at the dinner table, because it is likely to make someone uncomfortable,” Maibach told Nexus Media. “Our spring 2016 survey found that 56 percent of Americans see global warming as a political issue… that’s more than half the people at any given dinner table.”

The paradox can be explained by what people think the majority’s perceived opinion is, and the mainstream news is a big influence here. From the same report, we learn that less than half of the people involved in the survey say they come across the subject of climate change in the news on a monthly basis.

Not only is the mainstream media rarely taking up the subject — when it does the public is exposed to polarization giving the false impression that the science of man-made climate change is up for debate, as if this was a matter of simple opinion.

David Karpf, a professor of communications at George Washington University, isn’t convinced we’re dealing with a spiral of silence. Instead, his explanation suggests that Americans aren’t actively involved in the climate change conversation.

“That’s not really a spiral of silence,” he said. “If there were some set of events that acted as a drumbeat and pushed us to either pay attention to climate change or actively ignore it, then I think we’d see a lot more public conversation about climate.”

What might actually happen is a combination of the spiral of silence and lack of public involvement — Americans might simply do not feel climate change deserves their urgent attention yet. But the only way to give climate action the recognition it deserves is to start talking about it.

The mainstream media is sorely lacking in this respect — but you don’t have to. Talk to your friends and family. Get that ball rolling. And don’t worry — not everyone is a lunatic. No one will stop asking you to lunch because you tell them the Arctic’s ice has shrunk by 65% since the 1970s.

If they do, at least you applied natural selection.