‘We won’t ever see a month below 400ppm,’ said NASA’s chief climate scientist

We'll have some explaining to do when our kids grow up.

Though September is historically the ‘freshest’ month of the year after plants had a whole summer at their disposal in the Northern Hemisphere to grow and suck CO2 out of the atmosphere, scientists announced today that a dangerous threshold has been crossed. Virtually all weather stations around the world seem to have registered carbon dioxide levels above 400 parts per million (ppm). And it seems like we’ll be locked above 400 ppm permanently. There’s no way but up!

Anyone who has breathed air with less than 300 ppm CO2 is now over 100 years old!

The first weather station that registered 400ppm was the Mauna Loa Observatory in Hawaii back in 2013. It would soon be joined by other stations along the northern hemisphere — an inevitable event that was only a matter of “when” not “if”. 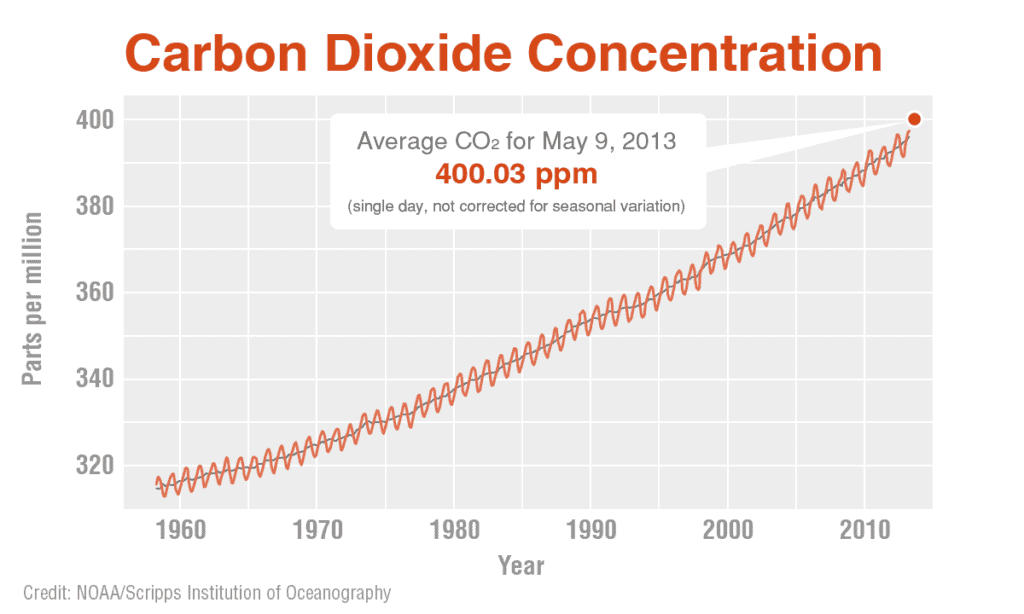 “Brief excursions toward lower values are still possible, but it already seems safe to conclude that we won’t be seeing a monthly value below 400 ppm this year – or ever again for the indefinite future,” wrote Ralph Keeling, the scientist who runs the Scripps Institute for Oceanography’s carbon dioxide monitoring program, in a recent blog post.

In March of this year, CO2 levels topped 400 ppm worldwide for an entire month. Then, in May, Antarctica — the last place where 400 ppm hadn’t been recorded — joined the rest of the pack as well. The latest critical threshold announced by scientists is that we’ve crossed 400 ppm and we’ll never see anything lower, not during our lifetimes for sure.

That’s because even if by some stroke of miracle all man-made CO2 emissions would stop tomorrow, the greenhouse gases already spewed are still trapped in the atmosphere. Greenhouse gas molecules emitted today can stay in the upper atmosphere for centuries before they break down. “In my opinion, we won’t ever see a month below 400 ppm,” said Gavin Schmidt, NASA’s chief climate scientist for Climate Central.

Today’s news was expected for some time, as we reported earlier that this year’s unusually strong El Niño event ought to push CO2 levels.

This figure, 400ppm, doesn’t pose a scientific significance, but it’s a very disheartening symbolic milestone. That’s because the last time the planet had 400ppm was 3 million years ago. Prior to the industrial revolution, natural climate variations caused atmospheric CO2 to vary between about 200 ppm during ice ages and 300 ppm during the warmer periods between ice ages.