Ever since the days of the ancient Greek, people were puzzled by the fact that apparently, hippos sweat blood; this belief propagated for more than a millenium. 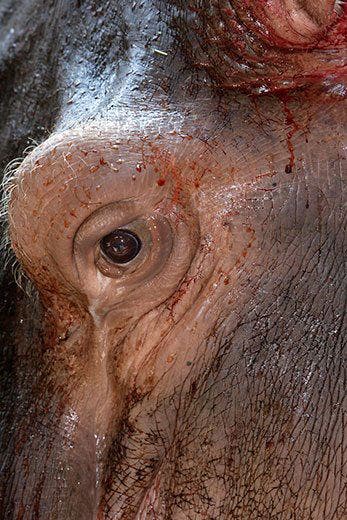 Now, we know that the thick red substance, which oozes from glands all over its skin, is one of the hippo’s many ingenious survival tools. Thing is, hippos are very routine-dependent animals: they spend most of the night eating (literally as much as they can), and when dawn hits, they retire into water and spend their days resting and digesting. Of course, when you want the day off to chill and digest, Sun is a big enemy, so you want some kind of UV protection. But something like fur isn’t the best option when you spend so much time in water, so hippos came up with something else: an anti-UV secretion, which is at first colourless, then red, then finally brown as the pigment polymerizes.

There are two different pigments, both which act as sunscreen, but one of them actually being a very effective antibiotic. At concentrations even lower than that found on the hippo’s skin, it can inhibit the growth of two types of pathogenic bacteria – this is particularly good, because hippos often fight, gaining some nasty open woods which are prone to infection.