Roofs that change colour to save energy

by Mihai Andrei
in Environment, Inventions
Reading Time: 2 mins read
A A
Share on FacebookShare on TwitterSubmit to Reddit 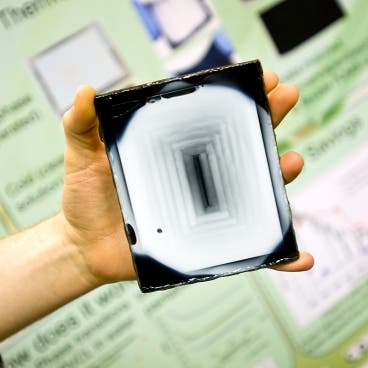 When it’s really hot and sunny outside, a black roof gets really hot, while a white roof reflects rays from the sun and keeps the house cooler. During the wintertime, a black roof absorbs more heat and helps you save more energy, but in the summer, that can be a really pain. Luckily enough, some researchers at MIT developed roof tiles that change color depending on the outside temperature.

The tiles become white on a hot day and turn blackish when it’s cold outside. When white, the tiles reflect more than three quarters of the rays and when black, only about a quarter or so. However, the study is incomplete; they showed that a white roof can save 20 percent of present cooling costs, but were unable to quantify how much heating energy a black roof would save.

The tiles also shouldn’t be very expensive – they rely on a polymer that resembles that used in hair gels. When cooled, the polymer remains dissolved, allowing a black background to show through, and when warmed it forms tiny droplets that scatter light and produce a white surface. However, researchers report there is still a whole lot of work.

“It’s got to stand up to very harsh conditions,” said Nick Orf, a member of the team that calls itself Thermeleon (get it?). “Those sorts of tests would have to be done before we’ll know if we have a viable product.”