Chimps use dipping sticks to harvest water from tree holes. They’re the only ones that can reach the resource

Researchers say these chimps have a 'drinking culture'.

Camera traps installed at the Comoe Chimpanzee Conservation Project in the Ivory Coast caught our closest relatives using tools in a new way for the first time. The clever chimps crafted dipping sticks by chewing one of the ends, turning a simple twig into a brush. The sticks are primarily used to harvest water from deep water holes. Only the chimps — and no other animal — seem to be able to access this kind of water resource, a clear competitive edge.

“The longer the brush, the more water they collect,” said Juan Lapuente, a lead researcher at the Comoe Chimpanzee Conservation Project.

Like humans, chimps use tool to make their lives easier. In 1960, Jane Goodall discovered that a chimp called David Greybeard would select twigs, strip their leaves, then use it to poke termite mound and collect the delicious insects. Since then, researchers have documented various other instances of tool use and, most strikingly, tool manufacturing. Josep Call from the Max Planck Institute for Evolutionary Biology in Germany said chimps who ‘fish’ for termites “complete tool manufacture by modifying the end into a ‘paint brush’ tip by pulling the stem through their teeth, splitting the probe lengthwise by pulling off strands of fiber, or separating the fibers by biting them.” 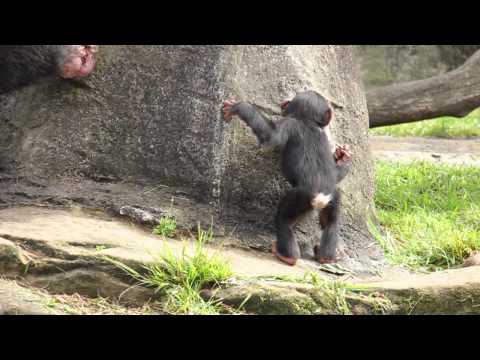 What’s more tool use and gestures are culturally based down, as documented by Dr. Catherine Hobaiter from the University of St. Andrews who witnessed how elder chimps in a community taught others how to use moss sponges to drink water.

Modified sticks remain the chimps favorite and most accessible tool. For instance, brush-tipped sticks are often used to harvest honey from bees’ nests, a practice common among many chimp populations in Africa. Sticks for accessing water, however, have only been witnessed in Comoe populations. This led the researchers to believe that these particular chimps have what they call a “drinking culture” — a practice shared among the group that helps them live through the dry season, as reported in the American Journal of Primatology.