by Alexandru Micu
in Animals, News
A A

The Dutch National Police (DNP) plans to launch the most metal anti-drone program in existence: they will train bald eagles to take down flying unmanned threats. They’re also planning to equip them with armored talons.

It’s going to be a world-first for law enforcement, DNP officials say. In a statement released on Sept. 13, they announced that the DNP is the only police force in the world at this time who will include birds of prey in its done defense arsenal. The announcement comes at the end of a one-year testing partnership between the DNP and Guard from Above, a private company based in the Hague that trains raptors to attack drones in flight.

The company’s chief executive officer Sjoerd Hoogendoorn says the project is “a low-tech solution for a high-tech problem”. He and Guard from Above’s chief operating officer Ben de Keijzer have pooled their experience to bring avian terror on unwanted drones — Hoogendoorn’s expertise is in private security while de Keijzer cares for and trains the birds.

The tests were so promising that the police force recently purchased juvenile bald eagles which it plans to train for this purpose. The birds have a wingspan of around 3.3 feet (1 meter) right now, but they’ll grow to between 5.9 to 7.5 feet (1.8-2.3 m) in adulthood. That’s a lot of bird, and it seems they’re naturally out to get drones in the first place.

“The drones are pretty much the size of a bird of prey, so smaller birds on the ground aren’t likely to mob a bird of prey when it’s flying – but larger birds are, especially when it’s around their nests,” reports the National Audubon Society’s Geoff LeBaron.

“The birds of prey are having an aggressive interaction to defend their territory from another bird of prey.”

This instinct will be enforced through training, so the eagles will see the drones as pray and engage them accordingly. And, just as they capture prey and bring it to their nests to feed, the birds will not only hunt the drones but also take them a safe distance away from crowds.

Michael Baeten, operational manager for the DNP, told AFP that the birds are “one of the most effective countermeasures against hostile drones” the force has at its disposal. Their arsenal includes several other methods as well, such as electromagnetic pulses and laser technology.

“What I find fascinating is that birds can hit the drone in such a way that they don’t get injured by the rotors,” LeBaron added. “They seem to be whacking the drone right in the centre so they don’t get hit; they have incredible visual acuity and they can probably actually see the rotors.”

The same tough skin on the eagles’ feet that protects them from the efforts of their usual prey should also be solid enough to ward off any small drones’ propellers. But larger drones might prove more dangerous, and the DNP said that the Netherlands Organisation for Applied Scientific Research (TNO) is working on designing special “claw protectors” for the birds — klauwbeschermer in Dutch — that will keep the eagles safe while hunting.

LeBaron says that the extra protection is welcome, but doesn’t think the birds will need it.

“Their method of attack is always going to be to hit it in the middle of the back; with the drones they perceive the rotors on the side and so they just go for the rear.”

Here’re two birds (one mature eagle and one juvenile) going at it: 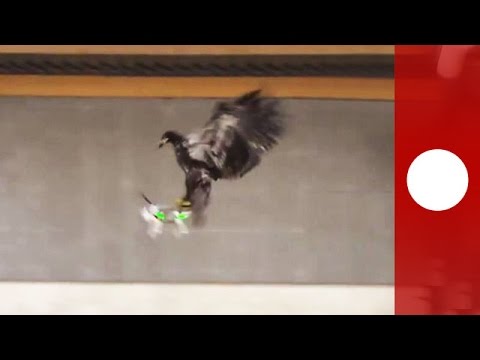