Viking 1: Laying the Foundation of Space Exploration on Mars

by Mihai Andrei
in Space
Reading Time: 5 mins read
A A
Share on FacebookShare on TwitterSubmit to Reddit

Traveling to Mars has been the dream of many people, long before the beginning of the space age. Hollywood even released a silent movie about a trip to Mars back in 1924!

Excitement escalated after the relatively short amount of time it took NASA to land and safely return men from the moon in 1969. Scientists thought that a Mars landing would surely be the next major accomplishment. However, budget cuts to America’s space program and the harsh reality of traveling to a distant planet put the dream on hold.

Now, almost 50 years after the moon landing, Russia, China and the United States are seriously planning to send humans to Mars. Elon Musk, founder of Space X, is charting a path to colonize Mars within the next decade. Musk’s primary reason for founding the company in 2002 was to “help make humanity a multiplanet species…colonizing Mars would…greatly advance science discoveries and technological capabilities, and…help inspire and excite people from…around the globe.”

Unknown to many people on Earth, America has already landed on Mars. Viking 1, built and launched by NASA, landed safely on the Martian surface 40 years ago this July. It was the first-ever successful mission to another planet. 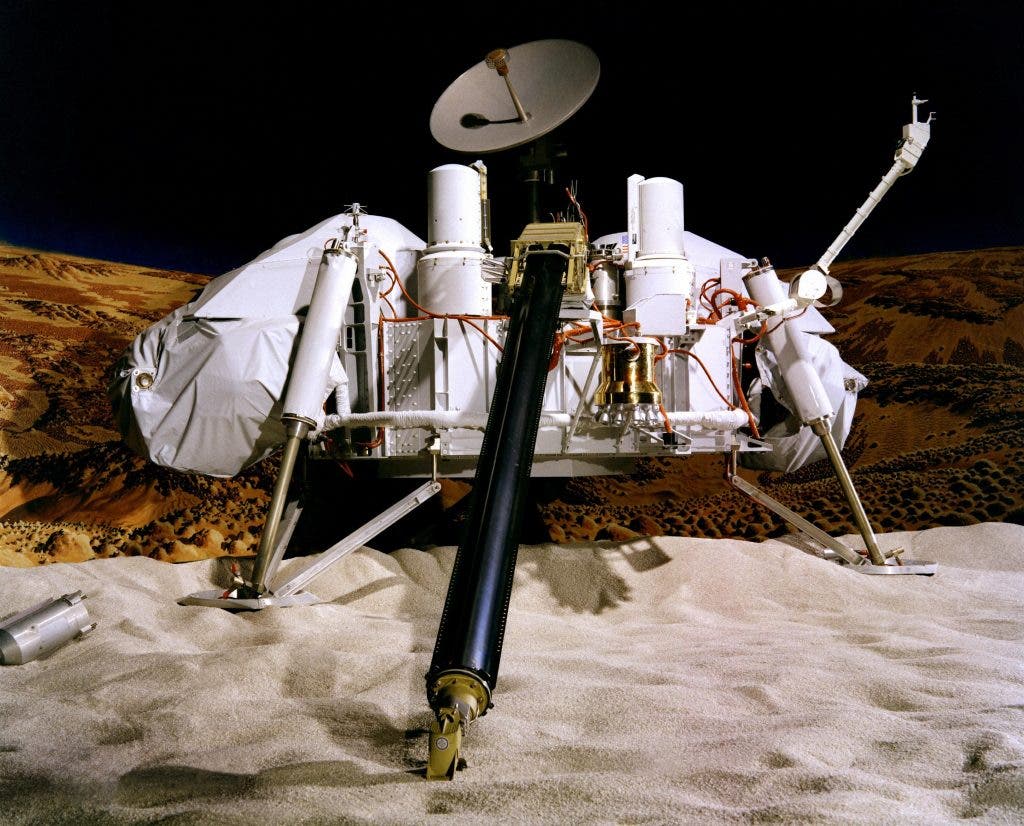 On August 20, 1975, a Titan rocket launched the Viking 1 spacecraft toward Mars, a 500-million-mile journey that took almost a full year to complete. Viking 1 carried two vidicon cameras for imaging, an infrared spectrometer for water vapor mapping and infrared radiometers for thermal mapping.

Due to the variations in available sunlight, Viking 1 was powered by radioisotope thermoelectric generators, creating electricity from heat given off by the decay of plutonium. This technology allowed long-term science investigations that otherwise would not have been possible.

NASA planned Viking 1’s touchdown for July 4, 1976 to coincide with the United States’ bicentennial celebration. However, Viking’s photos of the original landing site prior to descent showed a deeply incised riverbed, and NASA became concerned that the craft would not be able to land safely.

NASA decided to change the landing site. Viking 1 finally touched down on the western slope of Chryse Planitia (the Plains of Gold) on July 20, seven years to the day of man’s first step on the Moon.

Viking 1 started taking photos just minutes after landing. Below is the first clear image ever transmitted back to Earth of the Martian surface.

In addition to the planet’s surface, Viking 1 also took photos of volcanoes and ancient channels where floods may have occurred millions of years ago. The thousands of photos taken by Viking 1 helped NASA understand the conditions humans may experience upon arrival, such as dust storms, radiation and violent weather.

One of Viking 1’s more interesting experiments was its search for life. The craft had rudimentary tools that enabled it to scoop up a handful of Martian soil and check it for any sign of organics.

Although the experiments discovered some unexpected and enigmatic chemical activity in the soil, there was never any clear evidence of living microorganisms, at least none near the landing site. Scientists concluded that Mars is self-sterilizing. The combination of ultraviolet radiation, the extreme dryness of the soil, and the oxidizing nature of the soil chemistry prevent the formation of living organisms.

Other significant discoveries from Viking 1 include:

Viking 1 had an estimated lifespan of 90 days after landing, but it continued transmitting information for over six years until its last transmission on November 13, 1982. Viking 1’s mission was highly successful, forming the foundation of what scientists knew of Mars through the late 1990s and early 2000s.

Only the United States has successfully landed on Mars to date (e.g. Pathfinder, the Spirit Rover, and the Curiosity Rover). But now that all three major space agencies, as well as commercial entities such as Space-X and Bigelow Aerospace, are focused on sending humans there, it’s only a matter of time before one of them accomplishes the historic feat. Thanks to Viking 1 laying the groundwork for future Martian missions, future astronauts will at least know the challenges and obstacles they’ll have to face.

Dr. Walt Conrad, PMP, is a faculty member in the Science, Technology, Engineering and Math (STEM) at American Public University, teaching courses in space studies. He holds a D.B.A. in Business Administration from the University of Phoenix, as well as an M.B.A. in Business Administration and an M.A. in Space Systems Management from Webster University. Currently, Walt is a project manager at Science Applications International Corporation (SAIC).