Record setting astronaut says floating around in space is “priceless”

Sunita Williams is an Indian-American astronaut who currently holds the record for longest space flight time among female space travelers (over 200 days). She recently declared she’s not missing gravity at all and that she finds the experience of floating around in imponderability priceless. 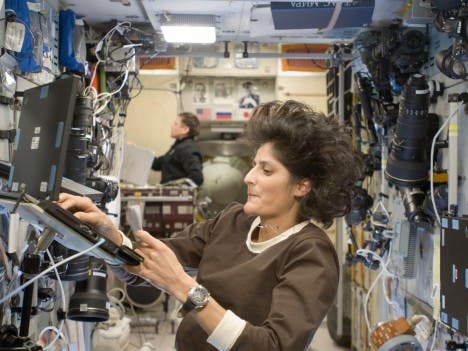 “I love being up here and I love floating around,” 47-year-old Williams, who is currently commanding the International Space Station’s Expedition 33 crew, said. “I think the mindset really is you know it is not going to last forever, so I think you take an advantage of flying around as much as possible,” said Williams, who is in space along with Flight Engineers Yuri Malenchekno of Russia and Akihiko Hoshide of Japan.

Sometimes the mind plays tricks on you when you’re in outer space, she explains.

“Still, every now and then, you take a bag of nuts and go like this, holding it up in the air to have them fall in your mouth, and that’s not going to work.”

Williams is the space station’s 33rd commander, but only the second woman to hold this title since the first crew took up residency 12 years ago. The current crew is expecting three more members: astronaut Kevin Ford and cosmonauts Oleg Novitskiy and Evgeny Tarelkin, who are set to arrive on the ISS later this week.