If the Americans and NASA are having some issues regarding their space program at the moment, the Russians are doing just fine; recently an unmanned Russian Progress cargo ship loaded with 2.9 tons of supplies and equipment traveled and docked the International Space Station without any notable incidents or accidents. 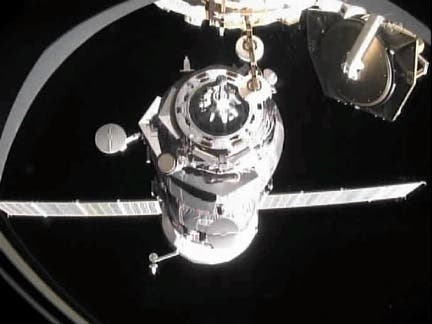 “Capture. We have indicator mode,” cosmonaut Sergei Volkov, noted, while monitoring the automated approach from the Zvezda command module.

Japanese astronaut Satoshi Furukawa was right by Volkov’s side, ready to help and assist in any way possible if necessary. But everything went fine and smooth.

“Progress 45 is secured and we’re looking forward to getting the hatches open and seeing what kind of goodies are loaded on there shortly,” Expedition 29 commander Mike Fossum radioed mission control in Houston.

“Sounds great. Nicely done up there,” a flight controller replied.

After this successful launch that faced no problems, Russian engineers seem prepared to take on the Soyuz launch, which proved to be quite problematic.

After the accident during the launch of a Progress cargo vehicle a couple of months ago, there’s been some uncertainty in the program,” Fossum said. “We’ve gone through a lot of work, the teams around the world, mostly in Russia, of course, have been involved with investigating the accident, trying to determine the root cause. We’re very happy that a couple of days ago they had the first launch, successful launch, of the Soyuz rocket with the Progress cargo vehicle riding on top. The launch was flawless.”.

All in all, everybody was absolutely thrilled to see this step done – it’s a breath of air space exploration badly needed in these dire and troubled times.

This was a huge step, this is a really huge step. This helps clear the rocket of any underlying problems and so the next Soyuz crew has already gone to Baikonur and are preparing to join us up here in just a couple of weeks.”