As the sun approaches the end of its 11-year-long cycle, scientists expect during one flash to change its polarity, ‘flipping’ upside down. You might think this would come at a cataclysmic expense, but there is absolutely no need to get alarmed. This happened every 11 years for as far as we can tell and each time the event wasn’t particularly felt here on Earth. Intensified solar storms that may damage satellite communications are expected, however.

The internal mechanism that flips the sun’s magnetic north and south every 11 years is surprisingly little understood. During the peak of each magnetic flip,  the sun experiences periods of increased solar activity, resulting in additional sunspots and events such as solar flares and coronal mass ejections (CMEs).

According to data gathered by observatories all around the world, astronomers predicted back in August that the flip would take between three to four months. We’re already in mid December right now, and apparently the reverse polarity could occur at any time. In the next couple of weeks, we’ll most likely have a confirmation from NASA on the exact moment this magnetic shift occurred.

“A reversal of the sun’s magnetic field is, literally, a big event. The domain of the sun’s magnetic influence (also known as the ‘heliosphere’) extends billions of kilometers beyond Pluto. Changes to the field’s polarity ripple all the way out to the Voyager probes, on the doorstep of interstellar space,” NASA’s Tony Phillips explained.

“Cosmic rays are also affected. These are high-energy particles accelerated to nearly light speed by supernova explosions and other violent events in the galaxy,” Phillips said. “Cosmic rays are a danger to astronauts and space probes, and some researchers say they might affect the cloudiness and climate of Earth. The current sheet acts as a barrier to cosmic rays, deflecting them as they attempt to penetrate the inner solar system. A wavy, crinkly sheet acts as a better shield against these energetic particles from deep space.” 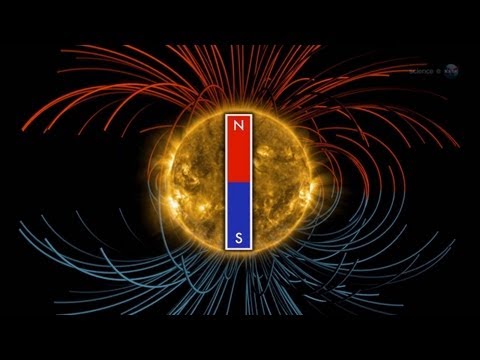