Sun to flip its magnetic field in a few months

by Mihai Andrei
in Astrophysics, Remote sensing
Reading Time: 2 mins read
A A
Share on FacebookShare on TwitterSubmit to Reddit

The Sun is gearing up for a major polarity switch, NASA announced: the North Pole which was in the northern hemisphere, has now started pointing south. The solar magnetic polarity reversal cycle has an 11 year period, which is still not fully understood. 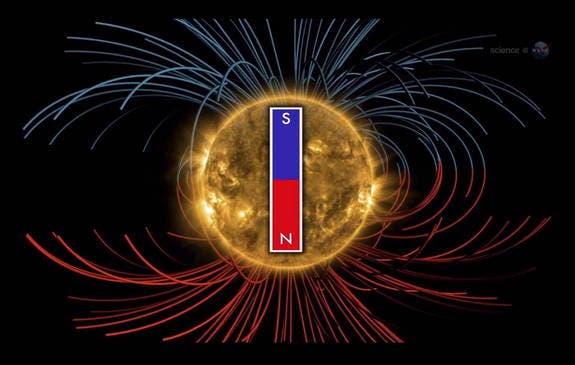 “This always happens around the time of solar maximum,” says David Hathaway, a solar physicist at the Marshall Space Flight Center. “The magnetic poles exchange places at the peak of the sunspot cycle. In fact, it’s a good indication that Solar Max is really here.”

This won’t have a major effect on Earth.

“The sun’s north pole has already changed sign, while the south pole is racing to catch up,” Scherrer said. “Soon, however, both poles will be reversed, and the second half of solar max will be underway.”

The Solar cycle was discovered all the way back in 1843 by Samuel Heinrich Schwabe, who after 17 years of observations noticed a periodic variation in the average number of sunspots seen from year to year on the solar disk. Initially, it was measured that there were 28 cycles in the 309 years between 1699 and 2008, giving an average length of 11.04 years. However, more recent measurements seem to indicate that the longest cycle was actually 2 cycles, so the average was pushed back to 10.66 years.

The Earth has magnetic pole reversals, though they are very different, varying in periodicity from 5.000 to 50.000.000 years! The last terran polar reversal took place 740.000 years ago, which makes many geologists believe that our planet is way overdue for a reversal.

The current solar cycle was the weakest one in the past 100 years, astronomers believe.