Scientists measure all the starlight ever produced in the Universe

The number of photons emitted into space is 4 followed by 84 zeroes. Now, that a moment to wrap that figure around your head.

Astrophysicists have measured all the photons ever emitted by the trillions and trillions of stars forged during the Universe’s 13.7-billion-long history. Unpeeling the history of star formation is a major breakthrough with ramifications in other areas of research, such as galactic evolution or the search for dark matter. Ultimately, work like this brings scientists closer to understanding the most fundamental processes, all the way back to the Big Bang.

Scientists estimate that there are about two trillion galaxies, which hold a trillion-trillion stars. In order to measure how much starlight has been emitted, Marco Ajello and colleagues at the Clemson College of Science turned to data from NASA’s Fermi Gamma-ray Space Telescope. Launched in 2008, the Fermi Telescope has so far provided invaluable information pertaining to gamma rays (the most energetic form of electromagnetic radiation) and their interaction with the extragalactic background light (EBL) — a ‘cosmic fog’ composed of all the ultraviolet, visible and infrared light emitted by stars or from dust in their vicinity.

The results suggest that the total number of photons that have been emitted into space by stars is about 4×1084 — that’s 4 followed by 84 zeroes. It’s a staggering number beyond our comprehension, but one that will help scientists greatly to understand how stars and galaxies evolve.

“From data collected by the Fermi telescope, we were able to measure the entire amount of starlight ever emitted. This has never been done before,” said Ajello, who is lead author of the paper. “Most of this light is emitted by stars that live in galaxies. And so, this has allowed us to better understand the stellar-evolution process and gain captivating insights into how the universe produced its luminous content.” 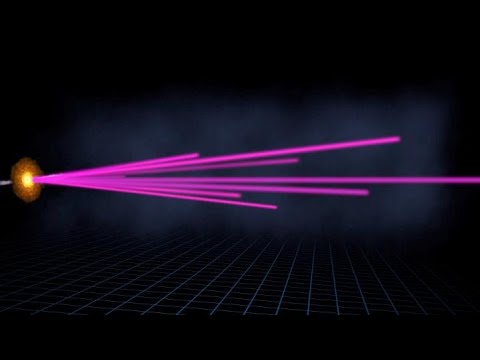 Despite the huge number of photons out there, the Universe is largely dim due to its sheer vastness. According to the researchers, starlight other than that coming from our own and Milky Way is as dim as a 60-watt light bulb viewed from 2.5 miles away.

The study hinged on observations of energetic particles emitted by blazars, which are galaxies with supermassive black holes that are capable of releasing collimated jets of electromagnetic radiation. When such jets happen to be directly pointed at Earth, our instruments are able to detect their source even from billions of light-years away. Gamma rays produced by the jets interact with the cosmic fog, producing an imprint that astrophysicists can use to measure the fog’s density. What’s more, this density can be measured for various times in the history of the universe.

“Gamma-ray photons traveling through a fog of starlight have a large probability of being absorbed,” said Ajello, an assistant professor in the department of physics and astronomy. “By measuring how many photons have been absorbed, we were able to measure how thick the fog was and also measure, as a function of time, how much light there was in the entire range of wavelengths.”

By directly measuring the density of this cosmic fog, the authors of the new study were able to eliminate the need to estimate light emissions by far-away galaxies. In total, 739 blazars were included in the study.

“Scientists have tried to measure the EBL for a long time. However, very bright foregrounds like the zodiacal light (which is light scattered by dust in the solar system) rendered this measurement very challenging,” said co-author Abhishek Desai, a graduate research assistant in the department of physics and astronomy. “Our technique is insensitive to any foreground and thus overcame these difficulties all at once.”

According to the study’s results, star formation peaked around 11 billion years ago — but it is still going strong. The Milky Way adds seven new stars every year, for instance.

Understanding star formation is important for astronomy research. For instance, this analysis will enable research in the future to target the earliest days of stellar evolution, using the upcoming James Webb Space Telescope, which should come online in 2021. And because the measurement is very sensitive to the expansion of the Universe, Ajello believes that their data can be used to measure the Hubble Constant more precisely.

“The first billion years of our universe’s history are a very interesting epoch that has not yet been probed by current satellites,” Ajello said in a statement. “Our measurement allows us to peek inside it. Perhaps one day we will find a way to look all the way back to the Big Bang. This is our ultimate goal.”