The star that should not exist

If you look at this picture, you will probably see what can only be described as an unremarkable, even faint star. But this ancient star, in the constellation of Leo (The Lion), called SDSS J102915+172927 has astrophysicists scratching their heads, searching for new answers. 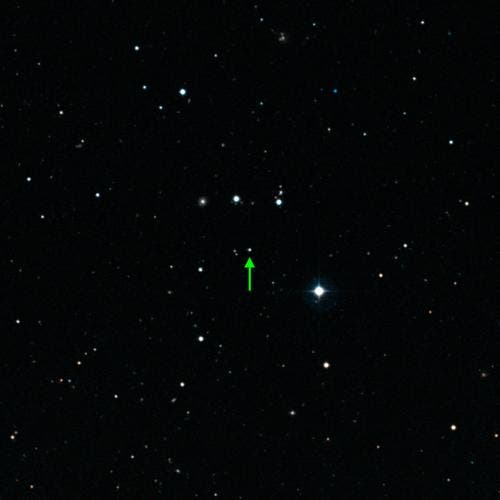 A team of European astronomers using ESO’s Very Large Telescope (VLT) to track down a star in the Milky Way that many thought was impossible: it is built only out of Hydrogen and Helium, with extremely low quantitites of other elements. This freakish composition puts it in the ‘forbidden zone’ of the widely accepted star formation theory, meaning that if the theory was correct, this star shouldn’t have formed.

The star has the lowest amounts of elements heavier than Helium ever to be discovered – 20.000 times lower than our Sun. It is also much smaller and older than our Sun – estimated at 13 billion years.

“A widely accepted theory predicts that stars like this, with low mass and extremely low quantities of metals, shouldn’t exist because the clouds of material from which they formed could never have condensed,” said Elisabetta Caffau (Zentrum fur Astronomie der Universität Heidelberg, Germany and Observatoire de Paris, France), lead author of the paper. “It was surprising to find, for the first time, a star in this ‘forbidden zone’, and it means we may have to revisit some of the star formation models.”

Yet here it is, looking all fine and dandy! Cosmologists believe that Hydrogen and Helium (and a little Lithium), the lightest elements, were created shortly after the Big Bang, while the others elements we see today were formed afterwards in stars. Supernova explosions spread this material across the interstellar medium, and new stars form in this enrichened environment, and therefore, the proportion of this material can give us a good dea about how old the star is.

“The star we have studied is extremely metal-poor, meaning it is very primitive. It could be one of the oldest stars ever found,” adds Lorenzo Monaco (ESO, Chile), also involved in the study.

Also, extremely surprising was the almost total absence of Lithium. Researchers believe that this star could have the same composition as the Universe in its early days; however, the star had 50 times less Lithium than you would expect in those days.

“It is a mystery how the lithium that formed just after the beginning of the Universe was destroyed in this star.” Bonifacio added.

Either way, astronomers now believe that this weird star is not the only one of its kind, so they are searching for more, using the VLT to find more examples and explain the nature of this weird star.