The SpaceX Dragon crew capsule's milestone safety state which took place the other day passed NASA's approval board. Back then, the capsule was launched atop a trunk powered by eight SuperDraco engines to a height of 1,187 meters (3,900 feet) at 345mph. The capsule then separated from the trunk and deployed three parachutes that touched it down for a splash in the Atlantic, very close to shore.

by Tibi Puiu
in News, Space
Reading Time: 3 mins read
A A
Share on FacebookShare on TwitterSubmit to Reddit 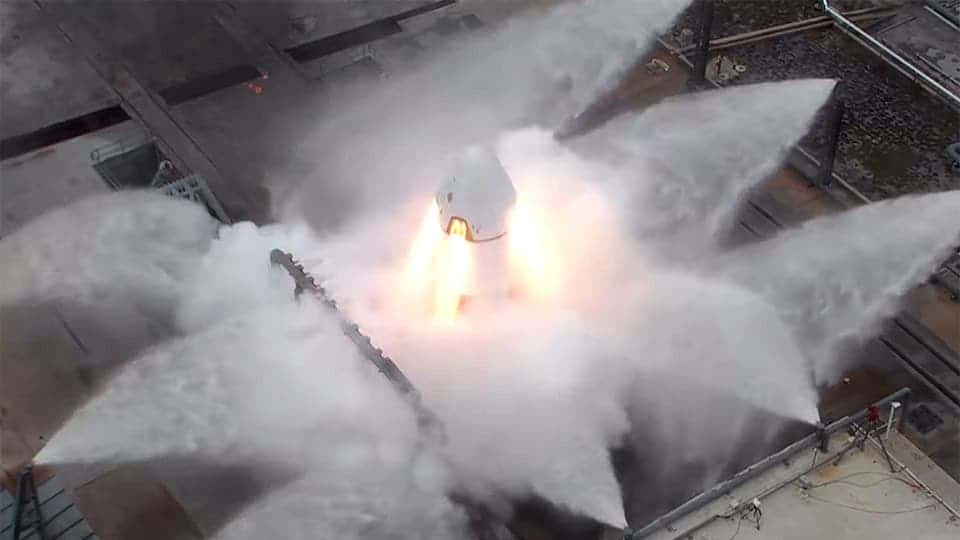 The SpaceX Dragon crew capsule’s milestone safety state which took place the other day passed NASA’s approval board. Back then, the capsule was launched atop a trunk powered by  eight SuperDraco engines to a height of  1,187 meters (3,900 feet) at 345mph. The capsule then separated from the trunk and deployed three parachutes that touched it down for a splash in the Atlantic, very close to shore.

“This is the first major flight test for a vehicle that will bring astronauts to space for the entire Commercial Crew Program,” said Gwynne Shotwell, president of SpaceX. “The successful test validated key predictions as it relates to the transport of astronauts to the space station.  With NASA’s support, SpaceX continues to make excellent and rapid progress in making the Crew Dragon spacecraft the safest and most reliable vehicle ever flown.”

NASA awarded $30 million to SpaceX for the successful test. Next, the Dragon Crew capsule will move to in-flight abort tests scheduled for this fall. The pod will perform the exact same operation as this most recent test,  but in the troposphere and near the speed of sound. Ultimately, both simulations and real tests such as these, will build enough confidence to allow a manned-crow to be boarded on the pod and launched to the International Space Station.  If all goes well, this could happen as early as 2017, making in the very first private venture to ferry a crew to the space station.

“This test was highly visible and provided volumes of important information, which serves as tangible proof that our team is making significant progress toward launching crews on American rockets from America soon,” said Jon Cowart, partner manager for NASA’s Commercial Crew Program. “The reams of data collected provide designers with a real benchmark of how accurate their analyses and models are at predicting reality. As great as our modern computational methods are, they still can’t beat a flight test, like this, for finding out what is going on with the hardware.”

But this is a competitive race, and Boeing is right on the heels of SpaceX. The company is running tests with its own  CST-100 capsule, which will see pad abort tests in February 2017, with an uncrewed flight test in April and a full mission with a test pilot and NASA astronaut slated for July, 2017.

Since NASA decommissioned its space shuttle program in 2011, the only viable mean of sending astronauts to the space station is with the Russian Soyuz craft. Once SpaceX or Boeing demonstrate their first manned maiden voyage, NASA will finally unchain itself from its Russian dependency and launches will become a lot cheaper due to market competition.