by Mihai Andrei
in Design, News, Space
A A

Brigham Young University (BYU) engineers have teamed up with one of the world’s leading experts in origami to solve one of space exploration’s most challenging (and ironic) problems – the lack of space.

Working with NASA’s Jet Propulsion Laboratory, a team of mechanical engineers have designed a solar array that can be tightly compacted for launch and then deployed in space to generate power for space stations and/or satellites. Facing a multitude of engineering and design problems, they decided that it’s time for a little outside the box thinking, and employed help from an unexpected field: origami.

However, applying origami principles to rigid silicon solar panels (a material much thicker and rigid than the paper used for origami) is no easy feat. The BYU-conceived solar array would unfold to nearly 10 times its stored size, so there challenge was set for origami expert Robert Lang.

“It’s expensive and difficult to get things into space; you’re very constrained in space,” said BYU professor and research team leader Larry Howell. “With origami you can make it compact for launch and then as you get into space it can deploy and be large.” 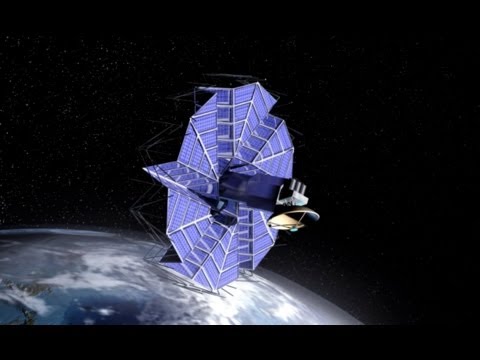 Howell believes that origami is a perfect solution for this type of problem – the principles of folding and expanding through compliant mechanisms is very cost-effective and can be successfully implemented in the harsh space environment.

“Space is a great place for a solar panel because you don’t have to worry about nighttime and there are no clouds and no weather,” he said. “Origami could also be used for antennas, solar sails and even expandable nets used to catch asteroids.”

The solar array they came up with can be folded tightly down to a diameter of 2.7 meters and unfolded to its full size of 25 meters across. While this is a very promising result, they want to push things even further. The goal is to produce an array that can produce 250 kilowatts of power. Currently, the International Space Station has eight solar arrays that generate 84 kilowatts of energy.

But Howell believes that this type of research could have a myriad of applications. Personally, I find this idea simply brilliant – the only thing I’m sorry is that nobody thought of applying earlier.

“This technology can also be valuable in applications ranging from minimally invasive surgery (surgical devices like stents that are small during incision and expand to do complex tasks at the surgery site) to consumer products (lower shipping costs or smaller storage space),” Howell explained to ZME Science. “We have also explored cube sat versions, which may be possible power sources for small satellites or for earth-based applications, particularly backpackable solar panels.

Other possible uses he mentions are foldable phones and housing or shelters that can be shipped or parachuted compactly.

“If we can extend the knowledge of origami artists to work in materials beyond paper, it will lead to powerful systems with unprecedented performance,” Howell concluded. “We will do things no one has ever done before.”