NASA turns to engineering crowd source for Mars mission in 2018

by Tibi Puiu
in Alien life, Space
Reading Time: 2 mins read
A A
Share on FacebookShare on TwitterSubmit to Reddit 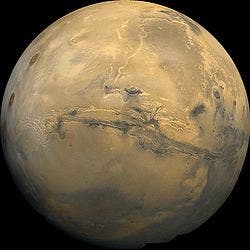 NASA is equivalent to innovation and cutting edge technology, and this was made possible by the creative flow of whole generations of brilliant scientists. The same philosophy is in place today, as well, and even though the agency has been faced with drastic budget cuts in the past few years, it has kept an open mind and still hasn’t abandoned aiming ambitiously high. Last Friday, NASA took an interesting decision – it announced that engineers and scientists could now submit entries in which they express their ideas, projects and patents designed for a mission to Mars in 2018, as well as other long term missions.

The best papers, which can be submitted online, will be selected and chosen for keynotes at the  Concepts and Approaches for Mars Exploration conference, organized in June, at the Lunar and Planetary Institute in Houston, Texas. NASA hopes the new approach of seeking input from outsiders will generate good ideas and help maintain technical skills in the U.S., the agency said. The deadline is May 10 and the final decision will be announced sometime in August.

An influx of new talent and ideas might generate some spectacular ideas, and at least some of the brightest scientific minds in the world will certainly enlist. Although the project has just been publicized, I’m confident some interesting ideas will be brought to the table, despite the rather short time frame.

“Exploring worlds other than our own is inherently a shared endeavor,” NASA chief scientist Waleed Abdalati said. “The people of Earth looking to other planets and beyond is not something that’s the purview of just one nation.”

NASA is most interested in a robotic mission to Mars in 2018. Every fifteen years, Mars and Earth are at their shortest distance from one another, a window of opportunity for launches that shouldn’t be missed, considering the great fuel and economic saving. So far, the only big constraint prospective scientists and engineers looking to enter a paper face is cost. For 2013, the administration recently cut the Mars exploration program funding by 21% to ~$1.2 billion.

The main objective remains the same  – finding evidence of life on Mars, or debunk the claim forever. Currently, the lead mission is the Mars Science Laboratory’s rover Curiosity, which is expected to land on August 6.  Next year, NASA will launch the Mars Atmosphere and Volatile Evolution orbiter, a probe to understand the Red Planet’s atmosphere.