Largest known structure in the Universe discovered by scientists

by Tibi Puiu
in Discoveries, Remote sensing, Space
Reading Time: 2 mins read
A A
Share on FacebookShare on TwitterSubmit to Reddit 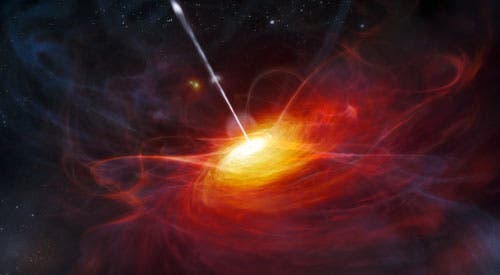 Astronomers from Britain’s University of Central Lancashire have recently published a landmark paper that describes the largest known structure in the Universe, a group of quasars so large it spans 4 billion light-years across at its longest end. The study holds broader consequences, not just because of the encountered astronomical milestone,  since it challenges  Albert Einstein’s Cosmological Principle, the assumption that the universe looks the same from every point of view, and which has stood in place for almost a century.

Quasars are the brightest objects in the Universe. They’re actually supermassive black holes surrounded by an accretion disk. When matter absorbed by the black hole located at the center of the galaxy reaches a critical level, a gigantic collision of matter occurs resulting  in a gigantic explosive output of radiation energy and light. Quasars are very distant objects, from much earlier in the Universe’s history.

Since a few decades ago scientists have known that quasars tend to group with another in structures of surprising size called  large quasar groups or LQGs. The recent quasar group discovered by the British astronomers is simply gigantic even by cosmological standards with a typical dimension of 1.7 billion light-years. However, because the structure is elongated it measures at its longest section a whooping 4 billion light-years. For a bit of perspective, the LGC is about 1,600 times as big as our galaxy, the Milky Way, which houses between 200 and 400 billion stars.

“While it is difficult to fathom the scale of this LQG, we can say quite definitely it is the largest structure ever seen in the entire universe,” Roger Clowes, leader of the research team, said in a statement. “This is hugely exciting – not least because it runs counter to our current understanding of the scale of the universe.”

Here’s lies the predicament, though. The current modern theory of cosmology suggests that astrophysicists shouldn’t be able to find a structure larger than 1.2 billion light years. The theory states that on very large scales the universe looks the same no matter where you observe it from.

“Our team has been looking at similar cases which add further weight to this challenge and we will be continuing to investigate these fascinating phenomena,” continued Clowes.

The findings were detailed in the journal of the Royal Astronomical Society.