Regardless of their size, all galaxies that just as long to come full circle.

Our planet spins around its own axis, with each completed cycle corresponding to the length of a day. The Earth also orbits the Sun, coming full circle every ~365 days, which we call a year. But now, researchers have found that not only do all galaxies spin around their core like cosmic clocks, they also all take just as long to complete a full revolution, regardless of their size. That’s about one billion years or so. Can we call it a galacton? What about a galaxium? I want more ideas in the comments.

“But regardless of whether a galaxy is very big or very small, if you could sit on the extreme edge of its disk as it spins, it would take you about a billion years to go all the way round.”

The researchers investigated numerous galaxies of all shapes, sizes, and rotational velocity, ranging from small dwarf irregulars to massive spirals

Meurer and colleagues found there were some persistent regularities such as that all galaxies of the same size also have the same average density of stars. “You won’t find a dense galaxy rotating quickly, while another with the same size but lower density is rotating more slowly,” Meurer said. 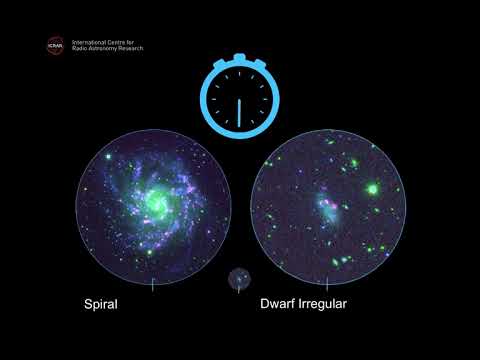 The astronomers thought they would find dispersed populations of young stars and gas at the edges of galactic disks. But instead, the models revealed that older stars exit through the outer edge of galaxies, too. This finding is of significant practical importance since it tells scientists where a galaxy ends, allowing them to limit observations and not waste time and computer processing power.

When the next generation of radio telescopes comes online, such as the massive Square Kilometre Array (SKA), these will generate a flood of new data, so knowing how to accurately identify a galaxy’s edge can save astronomers a lot of headaches.

By far, the most striking finding was that, no matter how big they are, all galaxies rotate once every billion years.

“So because of this work, we now know that galaxies rotate once every billion years, with a sharp edge that’s populated with a mixture of interstellar gas, with both old and young stars,” Professor Meurer said.

“When the SKA comes online in the next decade,” Meurer said, “we’ll need as much help as we can get to characterize the billions of galaxies these telescopes will soon make available to us.”

The study has been published in Monthly Notices of the Royal Astronomical Society.