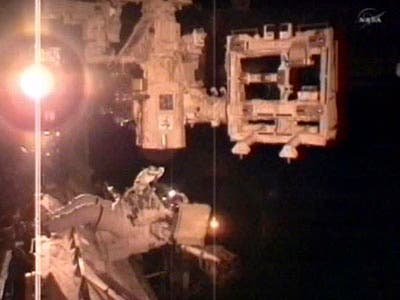 Spacewalking isn’t all fun and games – things can go bad at any moment, and in the latest spacewalk, this is exactly what happened: Mike Fincke, one of NASA’s most experienced spacemen, reported that while they were lubricating a joint in the life-sustaining solar power system of the International Space Station, they lost one bolt and they got one washer stuck in a crevice.

Basically, the bolts which were holding down covers on the huge joint started popping off unexpectedly. His spacewalking partner, Andrew Feustel sums it up with just one word:

You just gotta love this kind of sense of humour. However, they went into overtime, trying to fix whateved could be fixed, lubed the rest of the bolts and installed three covers. Thus, the spacewalk lasted 1 and 1/2 hours more than expected, becoming the sixth longest ever.

“You guys earned your pay for the day,” astronaut Gregory Chamitoff radioed from inside. The spacewalkers joked about getting paid, saying their reward was being outside watching the world spin by.

This was an extremely difficult mission, even for Fincke, who hadhis seventh spacewalk and Feustel, who had his fifth. They praised one another as they headed out the hatch. This is Endeavou’r second out of four planned pacewalks, afterwhich the space shuttle will go into a museum.