If proven right, this theory could be one of the most important developments in 21st-century physics.

Dark matter and dark energy make up 95% of the observable universe despite the fact that none of our instruments are capable of detecting it. What’s up with that? Scientists would sure like to know as well, although that doesn’t mean they’re completely in the dark. According to one of the most exciting researches on dark matter to date, this elusive form of matter may combine with dark energy to form a fluid with ‘negative mass’.

What does negative mass even mean, you might ask? It’s another a weird thing that physicists have constructed in order to explain even weirder phenomena. A hypothetical type of matter with negative mass would also have negative gravity, which means it would repel other matter around it. Likewise, if you’d push an object with negative mass, it would accelerate towards you.

Just like normal matter, negative mass would become spread out as the universe expands. But our observations suggest that dark energy does not thin out over time, which means it shouldn’t be negative mass. For this reason, many cosmologists have abandoned the idea of associating negative mass with dark energy.

Dr. Jamie Farnes from the University of Oxford is of a different opinion. The scientist has proposed a modification to Einstein’s theory of general relativity that allows negative masses to not only exist, but to be created continuously. This way, both dark matter and dark energy can be unified into a single fluid. When more and more negative mass is being added, the fluid does not dilute during the expansion of the universe.

“We now think that both dark matter and dark energy can be unified into a fluid which possesses a type of ‘negative gravity,” repelling all other material around them. Although this matter is peculiar to us, it suggests that our cosmos is symmetrical in both positive and negative qualities,” Dr. Farnes said in a statement.

Farnes seems to be on to something. His work is not some purely theoretical work either. For instance, the model can predict the observed behavior of dark matter halos — the invisible fabric that keeps galaxies from tearing themselves apart. The video below shows a simulation created by Farnes which predicts how dark matter halos form with properties just like the ones inferred from observations by modern radio telescopes. 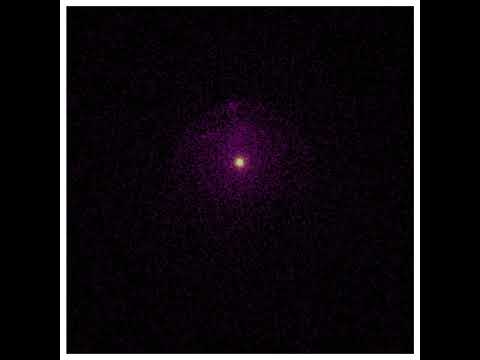 What’s more, negative mass isn’t purely theoretical either. Air bubbles in water can be modeled to have negative mass and, quite recently, scientists were able to generate particles that behave exactly as they would if they had negative mass.

[panel style=”panel-info” title=”Dark matter and dark energy” footer=””]Dark matter cannot be detected by our instruments, i.e. it’s completely invisible. Yet scientists know that it must exist because of the gravitational force it exerts on the surrounding matter that we can measure. Dark energy is the repulsive force that is responsible for the expansion of the universe at an accelerating rate.

Until now, the two have been treated separately. Now, Dr. Farnes claims that both are part of the same phenomenon — a unified dark fluid of negative mass. [/panel]

Albert Einstein actually provided  the first hint of a dark universe 100 years ago when he introduced a parameter in his equations known as ‘cosmological constant.’ Today, this parameter has become synonymous with dark energy, but Einstein always thought that it represents a failure on his behalf. In some of his notes, Einstein stated that ‘a modification of the theory is required such that “empty space” takes the role of gravitating negative masses which are distributed all over the interstellar space.” So, one might say that Einstein was the first to predict a negative-mass-filled universe.

“Previous approaches to combining dark energy and dark matter have attempted to modify Einstein’s theory of general relativity, which has turned out to be incredibly challenging. This new approach takes two old ideas that are known to be compatible with Einstein’s theory—negative masses and matter creation—and combines them together,” Dr. Farnes said.

“The outcome seems rather beautiful: dark energy and dark matter can be unified into a single substance, with both effects being simply explainable as positive mass matter surfing on a sea of negative masses.”

The new study might help solve some dicey problems in String Theory, which hopes to unify quantum physics with general relativity, but which is also plagued by inconsistencies with observational evidence. One of the tenets of string theory is that energy in empty space must be negative, which fits beautifully with the idea of a negative mass dark fluid. What’s more, a dark fluid could also explain why the Hubble constant — the relationship between the speed and the distance of a galaxy — seems to vary. A negative mass cosmology actually predicts that the Hubble constant should vary, which wouldn’t make it a constant at all, obviously.

Dr. Farnes’ theory will be tested with more scrutiny by the Square Kilometre Array (SKA), the world’s largest telescope. SKA’s main goal will be to measure the distribution of galaxies throughout the history of the universe

“If real, it would suggest that the missing 95% of the cosmos had an aesthetic solution: we had forgotten to include a simple minus sign,” the scientist concluded.